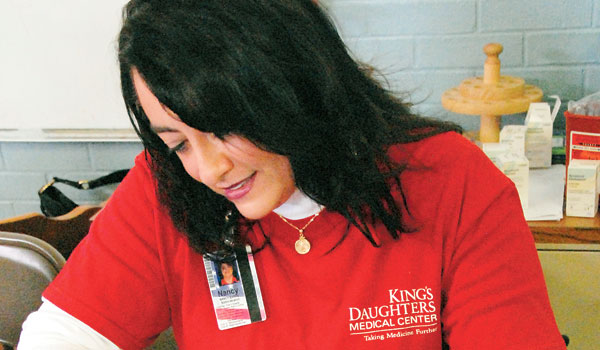 Health screenings, information and a little fun, too. That was what was offered at a community health day at the River Hills Community Center in Ironton Saturday.

“We just want to provide the community with a way of coming out and staying healthy,” said Mandy Medinger, marketing and community outreach specialist for Community Hospice.

Community Hospice, along with the Lawrence County Health Department and Caresource, sponsored the event, which is in its second year.

“It’s been pretty steady. Last year we had 100 people so we’re hoping to have at least that many,” Medinger said.

Despite the chilly temperatures, kids played in the inflatables that were set up on the lawn of the community center. Inside, representatives from King’s Daughters Medical Center were on hand giving cholesterol, blood sugar and blood pressure screenings. KDMC also brought a mobile mammography clinic to the health fair.

Eventgoers got a healthy snack along with information from agencies like the Ironton Fire Department, which was there to promote fire safety, and the Ironton and Lawrence County Health Departments, which gave out information about several different issues from lead poisoning to dental hygiene. Representatives from several other agencies like the Ironton-Lawrence County Community Action Organization participated in the health fair.

One of the eventgoers was Amber Meek, who brought her 20-month-old son, Adam.

“I live right up here and thought I’d come get some good information,” Meek said. “I planned to let him play in the inflatables and he wouldn’t have anything to do with it.

“I got my cholesterol and blood pressure checked and found that it was all normal so that was good.”

Your shoes may be worn out, but your shoe boxes could have thousands of miles to go. If you will... read more