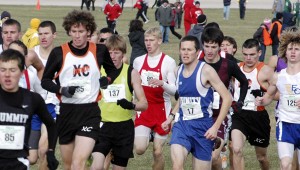 Ironton cross country runners Gary Monroe (second from left) and Pierce Reeves (second from right) run near the head of the pack at the start of the state meet on Saturday. (The Ironton Tribune / Jim Walker)

COLUMBUS — Together we can.

That motto seemed to be the key for the Ironton Fighting Tigers whose boys’ cross country team not only qualified for the state meet but finished seventh in the Division III race.

“It was a unique group,” said Ironton coach Tim Thomas. “They all worked hard and pushed each other and encouraged each other since they were freshmen. It was a great year.”

It marked the first time in school history that Ironton had an entire team qualify for the state meet.

Seniors Gary Monroe, Adam Stumbo, Pierce Reeves and Dustin Moritz were the leaders for the team, but Thomas said it should serve as a motivation for the younger runners.

“I’s been a great four years with our four seniors, but we have some great underclassmen who we’ll be able to enjoy their time,” said Thomas.

“Hopefully we can do it again,” said Runyon. “These four guys gave us great leadership and showed us how to win.”

“It was great (to run in the state meet,” said Tyler Lawless. “I wanted to break 20 (minutes), but it was a good race. I’m going to run all summer.”