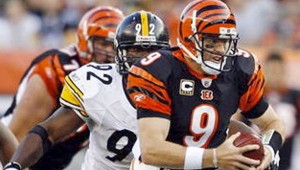 CINCINNATI — At the end of a night full of foibles, tricks and missed chances, the Pittsburgh Steelers turned to their one constant to finish it off.

That unyielding defense came through again.

James Harrison and Ryan Clark stripped the ball away from Jordan Shipley near the 5-yard line on Cincinnati’s final play, preserving a 27-21 victory over the Bengals on Monday night that left the AFC North with an old, familiar look.

The Steelers (6-2) are again at the top, sharing the spot with Baltimore. The defending-champion Bengals (2-6) are in last place alone after their fifth straight loss, coming up one completion short.

“The defense held strong,” said Ben Roethlisberger, who was 17 of 27 for 163 yards with a touchdown and an interception that helped the Bengals rally at the end.

“This is how the Steelers play ball,” Steelers defensive back Ike Taylor said. “We might get a blowout here and there. But we’re always in tough close ballgames. As a defense we just want to close them out. That’s what we did tonight.”

Pittsburgh seemed to be in control when Antwaan Randle El threw a 39-yard touchdown pass off a trick play to open the fourth quarter, building a 27-7 lead made possible by the Bengals’ many mistakes. Pittsburgh also had points set up by a fumbled kickoff, a blocked punt and a missed field goal.

Then, the Steelers turned sloppy as well. Roethlisberger threw an interception that set up Terrell Owens’ second touchdown catch of the game, and Jeff Reed missed a 46-yard field goal try that would have clinched it with 3:59 to go.

The drama had just begun.

Carson Palmer led the Bengals downfield with the help of a wacky play. His pass to Cedric Benson was tipped, but the running back made a juggling catch for a 16-yard gain on third-and-long. Chad Ochocinco’s only catch of the game moved it to the 12-yard line.

On fourth-and-5, Palmer found Shipley open over the middle in first-down range, but the two Steelers converged and squeezed the ball out to end it.

It was fitting that Harrison had a shoulder in the final play. He got his third fine of the season, this one pushing the total to $100,000, for a hit last week on the Saints’ Drew Brees. The linebacker got summoned to Commissioner Roger Goodell’s office for a meeting.

Goodell was at the game on Monday night, watching as the Harrison-led defense got the best of the Ohio River rivalry, one the Bengals swept last season with the help of a last-minute comeback at Paul Brown Stadium. Palmer’s touchdown pass with 14 seconds left won that one for the Bengals, jump-starting their perfect run through the division.

Eight seconds into the game, the Bengals already were in trouble.

The Steelers won the coin toss and deferred to the second half. Bernard Scott got the kickoff and fumbled at the Cincinnati 25. Pittsburgh needed only four plays to score, with Rashard Mendenhall pushing the final yard for a 7-0 lead.

When Scott held onto the ball as he was tackled during the ensuing kickoff, some Bengals fans gave a derisive cheer. They were incredulous moments later when William Gay burst through the middle of the line untouched and blocked Kevin Huber’s punt at the Cincinnati 30-yard line — Pittsburgh’s first blocked punt in two years.

“Initially, we created some opportunities for ourselves,” Steelers coach Mike Tomlin said. “You knew it was going to be a 60-minute game.”

With the backups in place, the Steelers managed to stay ahead. Roethlisberger threw an 8-yard touchdown pass to Hines Ward, his 15th TD catch against the Bengals — Ward’s highest total against any team. And Randle El’s first pass of the season went for a touchdown that seemed to put it out of reach.