For those who serve 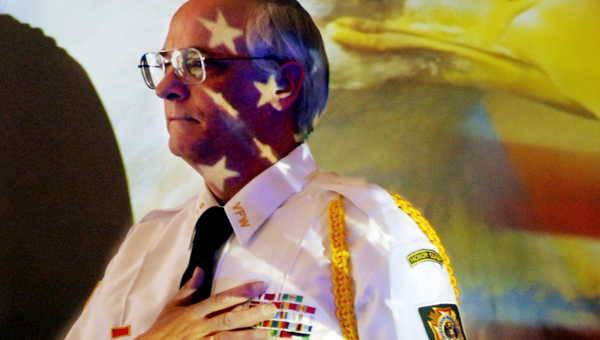 The program, Honoring Our Veterans: Past, Present and Future, began with the presentation of the flags by Cub Scout Pack 152 and Taps played by Mike Black of the VFW Post 6878, Proctorville.

Post 6878 also gave a presentation on the American flag, demonstrating the proper procedures for displaying the flag and also retiring it.

Katie Owens, Chuck Robertson and Catherine Cirner also contributed to the program, each singing songs dedicated to veterans in their lives.

Walton, gave a presentation about the five different types of government and the kind of government that veterans have been fighting for.

Walton served in the 7th Cavalry, second Squadron, in the U.S. Army and said, the events such as World War II, the Korean War, the moon landing and the march on Selma, are not history. They are still current events.

“People have very short memories,” he said. “If you don’t keep traditions going they are lost. Once they are lost, they never come back. People don’t know anything about them anymore. It becomes ancient history.”

“We are comfortable in the United States. We’re warm; we’re dry. We have a tendency to forget what’s really on the line and what’s really happening in the world,” he also said.

“Let’s not forget why we’re here,” he said as he choked up. “They know what they’re doing, the people that are serving right now. As someone who’s no longer able to serve, thank you for that.”

Many ways to say thanks

“To us in America, the reflections of Armistice Day will be filled with solemn pride in the heroism of those... read more