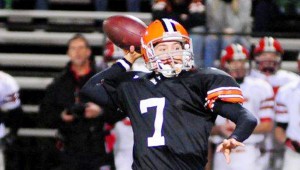 The backs get the headlines, but it will be the lines that set the stage.

Everyone will keep track of the rushing and passing yards and who scores the touchdowns, but the big key in Friday’s Division IV Region 15 semifinal game will be decided up front.

Ironton (9-2) and Sparta Highland (9-2) both have big, strong linemen and the team that controls the line of scrimmage will hold the upper hand.

“We have to move the ball and we can’t turn it over. It’s pretty simple,” said Ironton coach Bob Lutz.

Most of the same players will flip over to the defensive side with a few substitutions.

“Most games at any level are won in the trenches,” said Lutz. “They’ve got some size but we do, too. They’re better up front than last year and we lost some guys (to graduation), so we’ll just have to line up and see who gets the job done.”

The Fighting Tigers beat Highland 36-0 in the first round of the playoffs last season. But last year’s game was at Ironton and this time the teams are meeting on a neutral site at Logan.