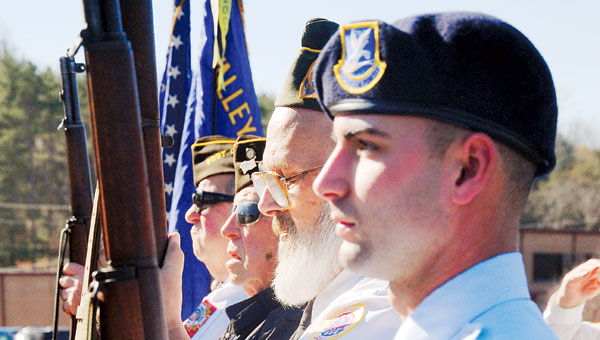 AID TOWNSHIP — The students and staff of Symmes Valley Schools commemorated Veterans Day with a ceremony to honor those who have served in the military. The ceremony was held in front of the school Thursday morning.

Principal Jeremy Newman of Symmes Valley Elementary School began the ceremony with the famous words of Francis Scott Key. Key, in writing the national anthem, called America the “land of the free and the home of the brave.”

“These words are as true today as they were then,” Newman said.

“And while we cannot repay the many servicemen and women who have given their lives to make that a reality, we can thank those living veterans for their service to the country,” Newman said.

The event included a flag-folding ceremony, taps and a gun salute performed by several veterans from the community. 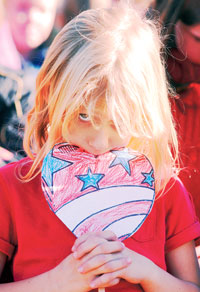 Leon Holderby, the chaplain of Amvets post 141 of Wilgus, said the ceremony and honoring those who have defended the nation is very important.

“I thank God for our nation and trust that he will keep us faithful to him,” Holderby said after the ceremony.

Ryan Turvey, a 2006 graduate of Symmes Valley, also spoke at the ceremony. Turvey is part of the Air Force. He will likely be deployed to Afghanistan in six to eight months, he said. One of the elementary classes plans to send him letters during his deployment.

“It really means a lot to me,” Turvey said after the ceremony. “I’m thankful I’m able to be here.”

The schools have been hosting a Veterans Day ceremony since opening in 1993.

“We feel like it’s important for the students to understand the meaning of Veterans Day,” Newman said.

He added that it is one of the ways the school teaches the country’s core values and “what it means for veterans to sacrifice for our freedom and what it means to honor them with this day.”

Newman thanked the staff members who helped put together the ceremony.

“We have a great staff here who puts this on,” he said.