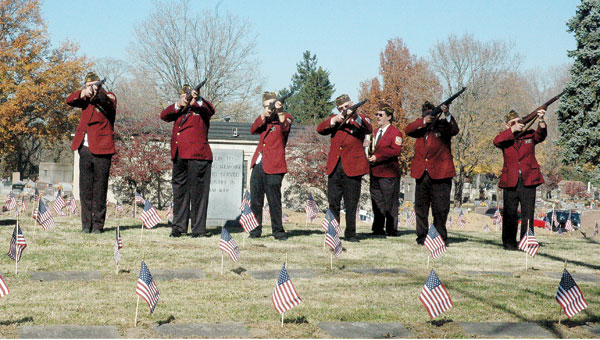 Lee Mays put his life on hold for four years when he signed up to serve in the U.S. Navy during the Korean War.

From 1952 to 1956 he served overseas. And almost 55 years later he remembers his homecoming back to the states.

“I came back from Korea and nobody patted me on the back, said they were glad I was back,” the Ironton man recalled.

That’s why he was one of about 50 who showed up at Woodland Cemetery at 11 a.m. Thursday to honor the veterans.

“I’m a vet and that’s why I am here,” Mays said. “Something like this needs to be done. I’d like to see a lot more out here.”

Under a sunny sky veterans and their families gathered at Soldiers Plot at Woodland for the annual Ironton VFW Post 8850’s ceremony. Led by past commander Louie Sheridan the service honored the living veterans of all wars.

What possesses someone to give up the comforts of American life to go overseas and live in harsh surroundings, Sheridan asked the audience.

“But that is what a veteran does,” he said. “I took my son to school today. He was able to go to school because of all of you. We stood and said the pledge. Why because we can. We had a prayer … We are not going to be arrested. … The vet gave us those opportunities.”

Joining Sheridan for the ceremony were Susan Taylor who sang the National Anthem and Bridget Reynolds who sang “God Bless America.” Prayers were given by Eric Barnes, associate pastor of First Baptist Church in Ironton, and Howard Smith, chaplain of the Ironton Post.

Then the honor guard fired the 21-gun salute volley and Phil Pinkerton blew the haunting refrain of “Taps.”

COAL GROVE — For the past 20 years, Coal Grove’s Paul Porter Park has been a place of Christmas tradition,... read more