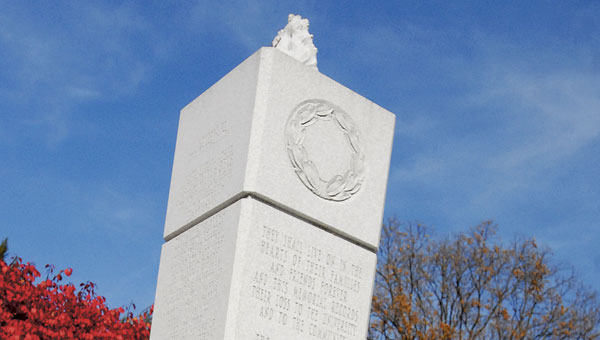 A bouquet of roses are placed at the foot of the Marshall University plane crash memorial in Spring Hill Cemetery in Huntington, W.Va. This year marks the 40 year anniversary.

Lonnie Best was 19 and working at a gas station, one of two jobs that helped pay his tuition at Marshall University. It was early evening when a friend came over to the station to tell Best news that still chills a community 40 years later.

The Southern Airways Flight 932 coming back from Kinston, N.C., to Huntington’s Tri-State Airport had plummeted into the West Virginia hills, just miles from the runway.

“Everybody was in disbelief,” Best recalls today.

Those numbers were read over and over by television news anchors for days afterward. But to Best, now Lawrence County’s 911 director, those statistics weren’t impersonal numbers. They were his friends. He saw them every day on campus and on the playing field.

“It was my sophomore year and I was an equipment manager,” he said. “I knew those guys. The people, the trainers, they were close friends of mine. They were wonderful. Everybody was friends. Everybody worked together. It was a great team.

“When you were in practice, everybody, the coaches, seemed to work as a unit. Everybody was fabulous.”

Best went immediately to Guillickson Hall, off Third Avenue, to be with the Marshall family.

“I went over there. I don’t know why,” he said. “People were going up and down the hall. The trophy cases were in Guillickson. Ex-players were there. Everybody was talking to each other. Everybody was in disbelief.

“We were there for quite a while. Some administration had come in. Some guys from the training department.”

In the days that followed was a barrage of funerals, many of which Best went to, to mourn with the family of his friends.

“The days after everybody was grief-stricken,” he said. “They were very, very somber. At that point, everybody was just at a loss. Nobody knew what was happening next. You had people come up who wanted to play the last ball game. Past players came back. Everybody wanted to be a part of it.

“That was something nobody thought would happen. You never think you won’t go back Monday morning and it wouldn’t be the same. But it wasn’t.”

Grief slowly healed, but no one over the past four decades hit by the tragedy has ever forgotten. For years Best wore a silver friendship chain around his neck that one of the players had given him.

“They have come a long way from there,” Best said about MU’s athletic program. “They have built such a good program. But we will never forget.”