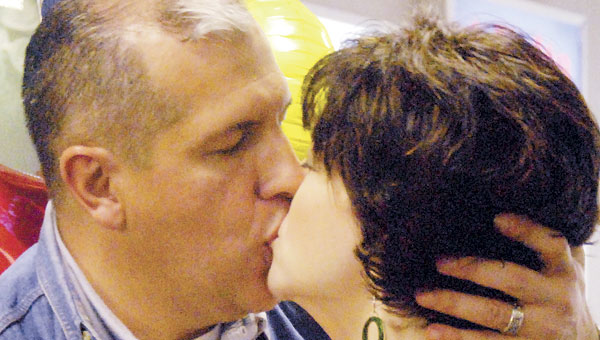 More than a year in the waiting, Rock Hill School teacher Lana Gillespie Ramirez and her husband Ricardo Ramirez share a moment following his landing at the Tri-State Airport Friday morning. THE TRIBUNE/JESSICA ST JAMES

HUNTINGTON, W.Va.– “Act normal, Lana,” a friend joked as she stood outside a gate at Tri-State Airport Friday morning.

“Yeah, right,” Lana Gillespie Ramirez shot back. “I may jump to the plane at this point.”

For the 44-year-old Rock Hill School teacher from Ironton, this day was anything but normal. After a long-distance marriage for nearly a year and a half, Ramirez’s husband was finally coming home from Colombia.

“I’m speechless. I’m just thrilled,” she said to a small crowd of friends and family who had gathered along with local media to celebrate with the couple.

The two met in 2008 through LDSplanet.com, a dating website for Latter Day Saints. They were married in July 2009.

“Through inspiration, through my heart, through my spirit, I knew this was my husband,” Lana said.

The two had visited each other twice in Colombia before Friday — once for the wedding and once last Christmas.

Coming through the doors at the airport, Ricardo Ramiriez was spotted first by one of Lana’s friends.

The 44-year-old Colombian first embraced his wife, then other members of his wife’s friends and family.

An artist, Ricardo Ramirez has had a 26-year career creating illustrations for children’s book, advertisements and the like. The couple decided he should move to America because his career would transfer more readily than would her 15-year career as a teacher.

The Ramirezes have been working on getting Ricardo’s green card for the last year and a half. Contrary to popular belief, marriage to an American citizen did not mean automatic citizenship for Ramirez.

“It’s very long and complicated,” she said. “It’s been a 16-month process for us. It’s not the automatic entry like we think it is, but it is worth it.”

Friday was Ramirez’s first day in the country, though his wife says he knows more about American culture and pop culture than she does.

“This is a beautiful country,” he said. “Very beautiful.”

BURLINGTON — Two Proctorville residents are at the Western Regional Jail after their arrest at a Huntington, W.Va., apartment around... read more