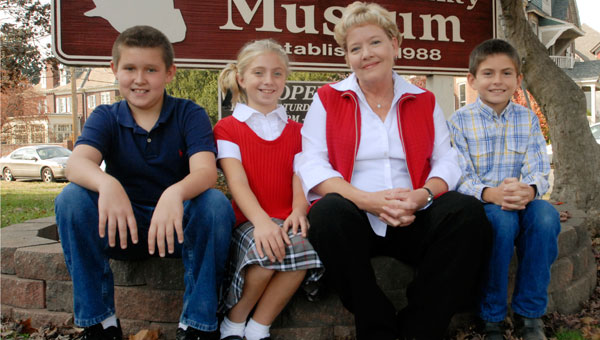 Pictured with language arts teacher Abby Fowler are Symmes Valley students Hunter Humphreys, Sarah Kingery and John Higgins. They each placed in a writing competition sponsored by the Lawrence County Historical Society. Contest rules required the students to pick any person prominent in the history and settlement of Lawrence County or one of the historic individuals interred at Woodland Cemetery.

It was finding a treasure trove of material for the three Symmes Valley fourth-graders who won the Lawrence County Historical Society’s inaugural essay contest.

The essay contest was held in conjunction with the society’s Historical Cemetery Walk and was open to any fourth-grader in the county. Contest rules required the students to pick any person prominent in the history and settlement of Lawrence County or one of the historic individuals interred at Woodland Cemetery.

About 20 students participated, with all the prizes going to Symmes Valley students.

First place was won by 9-year-old Sarah Kingery, who wrote about the famed World War I ace, Col. William Lambert. Lambert claimed to have 18 air-to-air victories, eight fewer than renowned Eddie Rickenbacker. Lambert, who died in 1982, was awarded the Distinguished Flying Cross. He and his wife are buried in Woodland.

“Both my grandpas knew him,” Sarah said.

One of Sarah’s grandfathers drove Lambert in the city’s annual Memorial Day Parade.

“I like learning about different things,” Sarah said about why she enjoys studying history.

Second place went to John Higgins, 10, who wrote about Nannie Kelley Wright, the only woman ironmaster in the history of the pig iron furnace era. Wright was at one time reputedly the wealthiest woman in the United States.

John likes history because “it’s a long time ago and you can learn stuff about it.”

Third place honors went to Hunter Humphreys, 11, who wrote about one of his ancestors, Thomas Humphreys, a Civil War hero and Union veteran. Humphreys performed many missions behind enemy lines.

“I like to learn about American history and about the world,” Hunter said.

All three are students of language arts teacher Abby Fowler, who encouraged her students to enter the contest.

“As their teacher the skill that these three have in abundance is curiosity,” Fowler said. “And they have a great ability to put their thoughts in words. This gives them an opportunity to shine.”

Prizes were $50 for first place; $25 for second place and $15 for third place. Judges were Nancy Livingston, Carol Allen and Bob Leith.

In 1940, a U.S. Forest Service District Ranger during a routine inspection of firefighting tools show a group of curious... read more