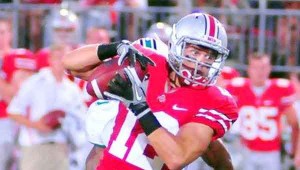 COLUMBUS — A whole season of hope and expectation rides on eighth-ranked Ohio State’s game at No. 21 Iowa on Saturday.

The Buckeyes know that all those offseason workouts, the grueling two-a-days in the heat of August, the close calls and the big wins will be for naught if they lose to the Hawkeyes. A defeat would most likely mean an end to Ohio State’s five-year run as Big Ten champion and maybe even a trip to a second-tier bowl game.

Win, however, and they will be just a victory against rival Michigan away from a sixth straight shared or outright conference title, plus they’ll still be in the mix for a Bowl Championship Series bowl bid.

They don’t expect it to be easy.

“We have a huge challenge having to play at Iowa,” wide receiver Dane Sanzenbacher said. “Iowa is a team that has made its reputation as a tough team. Whether or not they’re coming off a loss, I’m sure they’ve had this game circled on their schedule.”

Adding to the intrigue is Iowa’s 21-17 loss at Northwestern on Saturday. The Hawkeyes (7-3, 4-2 Big Ten) are on the outside looking in on the conference race, with Michigan State, Ohio State (9-1, 5-1) and Wisconsin all tied for first place.

“The Big Ten race, obviously we’re out of that,” quarterback Ricky Stanzi, an Ohio native, said after the defeat. “I don’t know. We’ve just got to go on to the next game.”

The Buckeyes know how the Hawkeyes feel. They went to Wisconsin last month and fell behind 21-0 early, drew close and then ended up losing 31-18. They say they learned a lot from that loss — and the experience helped them transform a 14-3 halftime deficit Saturday against Penn State into a 38-14 win.

“We’ve been there before with Wisconsin and we didn’t get the outcome we wanted,” defensive lineman Dexter Larimore said. “Since then we have assessed how we can come back and really applied it (against Penn State). We picked it up and got the game rolling in our favor.”

Ohio State hasn’t been a powerhouse on the road, struggling at Illinois before losing at Camp Randall. They won at Minnesota not long after head coach Tim Brewster was fired.

“Going on the road for a big game like this, it helps that we have an older team,” Sanzenbacher said. “I hope we react differently than we did at Wisconsin. All that could have gone wrong did at Wisconsin. But that will help us prepare for this situation.”

The Buckeyes expect the Hawkeyes to be desperate.

The 2009 game pitted two teams tied for first in the Big Ten. Once again Iowa was coming off a loss to Northwestern, which had ended the Hawkeyes’ perfect season. They also lost Stanzi to an ankle injury in that game, so freshman James Vandenberg got his first career start.

After a slow start, he led the Hawkeyes to three second-half touchdowns, tying the game at 24 with a 10-yard pass to Marvin McNutt with 2:42 left.

The victory clinched a share of the Big Ten title and sent Ohio State to the Rose Bowl for the first time in 13 years.

The Buckeyes have almost always played well at Kinnick Stadium, winning six of their last seven there. The only setback in that string is Iowa’s 33-7 victory in 2004. They’ve only played at Iowa once since then, winning 38-17 four years ago.

Kinnick is a tough enough place to play without facing a team that risks so much.

The game would have been important regardless. Except now neither team can afford another slip or they’ll be all but an afterthought for the rest of the season.

The solution is simple for the Hawkeyes.

“We’ll go back to work and see what we can do about bouncing back,” coach Kirk Ferentz said.

Bengals reverting back to bad days of old

The Associated Press CINCINNATI — The Bengals are stuck in the bad old days. Some of their fans showed up... read more