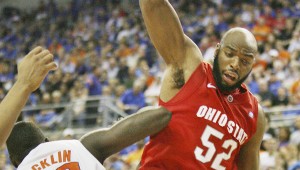 Sound crazy? Not to Donovan, who witnessed a “complete” Buckeyes team dismantle his ninth-ranked Gators on Tuesday night.

Jared Sullinger dominated inside and David Lighty broke guys down outside as Ohio State beat Florida 93-75 in an early season matchup of teams with national championship hopes.

The Buckeyes (2-0) used a nearly flawless second half to turn a small deficit into a double-digit lead that sent fans scrambling for the exits with about 5 minutes remaining.

“Ohio State has a better chance of being a better team this year than they did a year ago,” Donovan said. “Evan Turner’s a great player, the player of the year in the country and they won 29 games and did a great job.

“But when you have that kind of player, you really kind of become a little more one-dimensional. They are a complete team that probably has a chance to do a little more this season because there’s going to be a lot more balance to their team.”

Although Sullinger and Lighty did most of the damage, they got plenty of help.

Neither team played much defense.

The Gators shot 61 percent from the field and 43 percent from 3-point range. The Buckeyes were slightly better at 63 and 43. The real difference came after halftime, when Ohio State hit 24 of 34 shots and sliced through Florida’s press with relative ease.

The Gators (1-1) led by seven points in the first half and were up 41-38 at the break thanks to 60 percent shooting, a 19-8 rebounding advantage and a 24-14 edge in the paint. Matta made it clear in the locker room that his guys needed to get tougher.

“We challenged our guys to get in there and rebound the ball better,” Matta said. “We just weren’t as physical as we needed to be.”

Ohio State turned things around in the second half.

Sullinger finished 13 of 17 shooting and had 10 rebounds, including five offensive boards. He abused Vernon Macklin and Alex Tyus in the paint, scoring on layups, dunks and short jumpers. His only weakness came at the foul line, where he missed both attempts.

“He had a great demeanor coming in here,” Matta said. “He knew he was going to half to play well for us to have a chance to win.”

Lighty was just as important to the game plan. Florida rotated several defenders on the senior, but none had any success. Lighty hit 9 of 11 shots and made 6 of 7 from the free throw line. He drove to the basket repeatedly, getting fouled or forcing defenders to leave Sullinger alone under the basket for dunks.

“In the second half, we kind of knocked them around a little bit and went after the ball,” Lighty said.

“They started jumping on us,” Florida’s Chandler Parsons said. “They started hitting some shots. We didn’t start executing. We weren’t very disciplined on offense. It’s early and it’s a learning experience. To play a team that good early on, hopefully it turns out to be a good thing us.”

Parsons had 13 points and seven rebounds for Florida. Erving Walker added 15 points, but had seven turnovers. Macklin chipped in 12 points and five rebounds.

To Donovan, the Buckeyes clearly looked like the more well-rounded team.

“To lose the last 10 minutes just hopefully helps our guys understand how far we have to go to be a complete team for 40 minutes,” Donovan said.