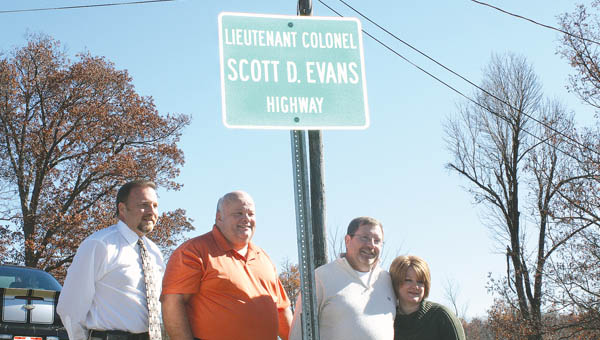 Lawrence County Commissioners Les Boggs and Doug Malone joined Scott Evans and his wife, Heidi, at the dedication of the sign in Decatur Township.

Decatur Township — Veterans Day this year was a special occasion for the family of Lt. Col. Scott D. Evans. That is when the Lawrence County Commissioners formally unveiled the sign that now marks a section of State Route 373 for Evans.

Recently the commissioners sent a request to the Ohio Department of Transportation that a section of the state route between the south 1.14 mile marker and the north 1.42 mile marker be named in honor of Evans.

A native of Lawrence County, Evans grew up in Decatur Township. He entered the military in 1983 when he joined the 216th Engineer Battalion, Ohio National Guard, serving as an enlisted man and non-commissioned officer for seven years. Then he earned a commission from officer candidate school.

He completed more than 350 missions and 500 combat patrols.