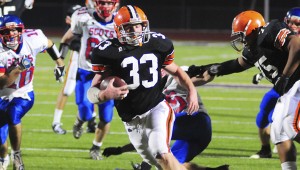 There’s one important and valuable lesson Ironton learned from its first meeting with the Columbus Hartley Hawks.

“They can score anywhere on the field at any time,” said Ironton coach Bob Lutz.

“The last time we played, we kept them from making the big play for the most part, but that hasn’t been the case the rest of the season. If you look at their games, they always scored a lot of points. We were fortunate they turned the ball over four times the last time we played.”

The Fighting Tigers will be leery of the danger signs Friday when the teams meet for the second time in more than a month as the play for the Division IV Region 15 championship at Logan.

The most dangerous weapon in the Hawks’ offense is 6-foot, 185-pound senior running back Noah Key, son of Hawks’ assistant coach David Key who played at Michigan in briefly in the NFL.

“He’s the best back we’ve seen all season,” said Lutz.

The speedy Key is the workhorse for Hartley. He has 256 carries on the season for 2,326 yards and 34 touchdowns.

But Key isn’t the only player wearing a danger sign.

Quarterback Austin Underwood is 45 of 85 for 695 yards and seven touchdowns with six interceptions. Omar Lane had 16 receptions for 253 yards and two scores to lead the receiving corps.

Lane also has 49 carries for 561 yards and eight touchdowns while Underwood has 22 rushes for 106 yards and a score. Ja’Waun Woodley has 42 attempts for 215 yards and four scores.

“They’ve a got a lot of weapons so you can’t just focus your attention on Key. Lane is a big play guy running or catching the ball. He had a big play against us the first time we played,” Lutz said of a 52-yard Underwood to Lane pass that set up the Hawks’ second touchdown.

Although Ironton scored 37 points in the first meeting with the help of the turnovers, Lutz said it won’t be so easy this time.

“They’re better than the first time we played them and they’ve seen what we do just like we’ve seen them,” said Lutz. “I’m sure they’ll make some adjustments just like we will.”

Friday’s winner advances to the state semifinals to play the winner of Kettering Alter and Kenton.