Motorists may now cross that bridge 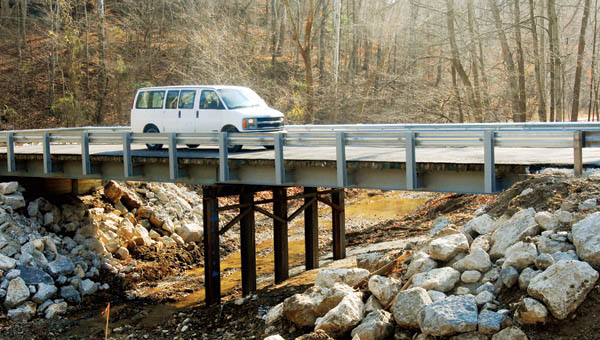 A new, temporary bridge is now open to traffic at Lake Vesuvius, making traveling a little easier for some residents in that area.

The Storm Creek bridge on County Road 29 was severely damaged during heavy rains and flooding on July 20 of this year. The temporary bridge was built to allow traffic to flow again until the permanent bridge can be constructed.

Lawrence County Engineer Dave Lynd, said the temporary bridge was completed this past Friday. He said, while it is a temporary bridge, it is designed to safely carry regular highway loads.

“It’s a good job,” Lynd said. “It will let everybody get in and out of there again and improve access.”

Lynd said the U.S. Forest Service was a big help in providing the funding for the bridge, both the temporary and the permanent bridge that is now in the planning stages.

“They have different funds available for repairs on what they call forest highways, and County Road 29 is a forest highway,” Lynd said. He said that, so far, Lawrence County hasn’t had to cover any of the cost, but that will depend on the final cost of the permanent bridge and the total amount the U.S. Forest Service has set aside for the project.

“We’re glad we’re able to work with the forest service and get some help,” Lynd said. “This would be a real expense on Lawrence County’s budget if we had to cover that. It’s over $1 million of work that would have to come from the local budget if it didn’t come from Forest Service, so we really appreciate it.”

Not having the bridge meant that some people had to travel a different route to make it to their homes or employment.

“It’s been a real inconvenience,” Lynd said. He said now that the temporary bridge has been completed, the focus can be on the permanent structure.

“You want something appropriate to the park,” he said. He said he is hopeful the planning will happen during the winter, with advertising for the construction process beginning in the summer.

“That’s the kind of time frame we’re looking at, maybe to have something finished a year from now, or in the spring of 2012,” he said. “The planning is pretty important so that you get what you want.”

Lynd said there will likely be many people involved in the plans for the permanent bridge, including the U.S. Forest Service, the public and even the National Register of Historic Places, as the bridge it will replace was on their official list.

As our stockings will be hung by our chimneys with care this holiday season, one local Ironton business is hoping... read more