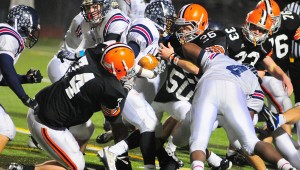 LOGAN — In the old sitcom “Get Smart,” secret agent Maxwell Smart would just miss on occasions, make his index finger and thumb almost touch and say, “Missed it by that much.”

The Ironton Fighting Tigers “missed it by that much” on several occasions Friday night and as a result just missed a trip to the Final Four as the Columbus Bishop Hartley Hawks escaped with a 26-20 win to claim the Division IV Region 15 championship.

“It’s tough to beat a good team twice,” said Ironton coach Bob Lutz. “We had chances and didn’t make some plays, and when we did make plays there always seemed to be something that happened to negate it.”

The near misses could have been crippling to Hartley. One came on a pass that was just out of the reach of Pierce Reeves at the 20-yard line after he had burned the Hartley secondary with Ironton leading 14-10 in the third quarter.

A second came early in the fourth quarter that could have changed the outcome drastically. With a third–and-5 at the Ironton 16, Hartley quarterback Austin Underwood threw to tight end Jacob Matuska near the 10 when safety Tommy Waginger broke on the ball and it skipped off his fingers for an incomplete pass.

Instead of a pick six to give Ironton a 20-10 lead, Hartley dodged the bullet and kicked a field goal to get within 14-13.

In the first meeting, Ironton won 37-16 when Hartley had four turnovers including two interceptions. This time Ironton provided the turnovers.

Two fumbles — something that has been virtually absent for Ironton all season — led to a pair of fourth quarter scores that enabled Hartley to rally for the win. The Fighting Tigers had fumbled just 10 times all season coming into the game and had lost only five.

“We said coming in that they weren’t going to turn the ball over like they did the first time we played them, but we felt if we didn’t turn it over we could win,” said Lutz.

Hartley (11-2) elected to use pooch kickoffs in the game and Ironton got the ensuing kick at its own 48.

Tres Wilks ran 22 yards to the Hawks’ 30 and Brian Warner ran for 2 more yards. But the Fighting Tigers fumbled on the next play and Hartley recovered at the 26.

The Hawks then used the momentum swing to go 74 yards in eight plays.

Omar Lane ran 26 yards on the first play and Jarrod Zang had a 17-yard run and JaWaun Woodley ran for 12 more.

Hartley got to the Ironton 12 when they were called for a blocking below the waist penalty, but four plays later Noah Key ran 2 yards and Hartley led 19-14 with 5:13 to go.

The Fighting Tigers (10-3) weren’t the only ones making mistakes. Several poor judgment calls by the officials aided Hartley.

Ironton had a first down at their own 45 when Waginger threw a swing pass to Wilks that went incomplete. The referee ruled incomplete but the linesman called the pass a lateral and Hartley recovered the ball at the 34 with 4:03 left.

Four plays later Key ran 23 yards for what appeared to be the clinching score as Hartley went up 26-14.

Hartley kicked off out-of-bounds and Ironton wanted a re-kick. Hartley was offside on the next kickoff and found themselves kicking from the 30. The next kickoff was a pooch kick that Ironton grabbed at the Hartley 47.

Waginger connected with Warner for 15 yards, Reeves for 7 more, then dropped a perfect throw to Wilks who tight-roped the sidelines for a 26-yard gain to the 16.

Tyler Kratzenberg then made an over-the-shoulder catch on a flag rout for a 16-yard touchdown reception and Ironton trailed 26-20 with 1:06 to play.

But Ironton was unable to execute the onside kickoff and Hartley ran out the clock.

“You are always faced with adversities. You have to be able to overcome them. That wasn’t the case tonight for whatever reason,” said Lutz.

After a scoreless first quarter, Hartley used a 60-yard pass to Lane that got the ball to the Ironton 19. Four plays later Key ran 3 yards and it was 7-0.

Wilks gave Ironton a big play with a 38-yard run to the Hawks’ 20 and two plays later Warner ran 19 yards dragging Key with him the final 3 yards as he scored to cut the deficit to 7-6. The conversion run failed.

Hartley drove to the Ironton 11, but Key was stopped a yard short on a fourth-and-2.

Warner ran 6 yards on first down out to the 16 and then Wilks bolted through the defense and outran the Hawks 84 yards for a touchdown. Waginger threw to Wilks on the conversion and Ironton led 14-7 with 2:28 left in the half.

Key fumbled the kickoff, then picked it up and ran 53 yards to the Ironton 41. That set up a 27-yard field goal by Wahle with four seconds left and it was 14-10 at the brake.

Ironton drove to the Hartley 38 and elected to punt on fourth down. Jake Rawlins’ kick was touched dead at the 1-yard line and Ironton’s defense went to work.

On third-and-5, the 6-foot-4 Matuska went up for a pass but was hit and flipped by Kratzenberg causing an incomplete pass and setting up a punting situation from the Hartley end zone.

Excited with his big play, Kratzenberg jumped up and high-stepped a couple of steps as he ran toward the Ironton sidelines. But the back judge decided to call an unsportsmanlike penalty for taunting even though Kratzenberg wasn’t looking at the receiver and was running off the field.

The result was a first down at the 21 instead of punting from the end zone and giving Ironton the ball in Hartley territory.

Hartley then drove to the 16 and — after Waginger just missed an interception — kicked a field goal to draw within a point.

For the Fighting Tigers, it marked the second straight year they have lost a tough game in the regional finals. Last year they fell 20-14 in overtime to Coshocton.

“This was an enjoyable bunch to coach. They worked hard and did everything we asked of them,” said Lutz.

Hartley advances to the state semifinals for the first time since 1988 and will play two-time defending state champion Kettering Archbishop Alter who outscored Kenton 35-32.

The Associated Press IOWA CITY, Iowa — Fourth down, 10 yards and most likely the season was on the line... read more