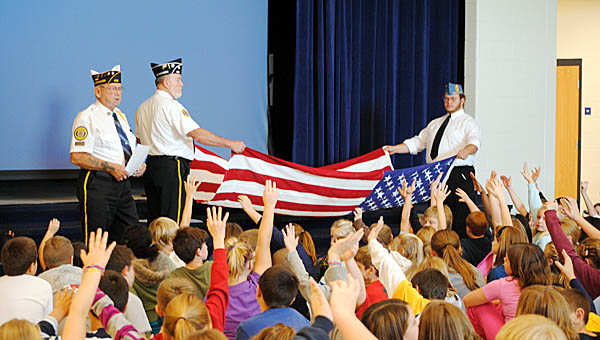 American Legion Post 433 member Bill Jordan explains the meaning of each fold of the flag as Tom McClain and William Harmon fold it during a presentation at South Point Elementary. THE TRIBUNE/JENNIFER CHAPMAN

The students at South Point Elementary School learned a little more about what it means to be a veteran, thanks to the American Legion Post 433.

This is the second year the American Legion has presented this program at Lawrence County schools. Bill Jordan, 75, of South Point, shared with around 150 attentive students what being a veteran means in a presentation at the school on Friday afternoon. He opened up with prayer and the pledge to the American flag, followed by a video explaining what a veteran is, the sacrifices veterans made and why they do it.

“It’s a joy to get to the kids and let them know what their parents and grandparents did to let them have their freedoms,” Jordan said. “We love the kids.”

Jordan told the students that people often don’t appreciate what they have because they have it everyday. Presentations like the one they did can serve as a reminder.

“We enjoy telling them about the past, about the military and what everybody does and why they do it,” McClain said. “What we have done is history, even if we didn’t realize it at the time.”

“We’ll be doing this every year, as long as the schools let us,” McClain said.

Principal Chris Mathis was pleased with the presentation made to the students.

“I hope they have an appreciation of the sacrifices made for them,” Mathis said. “We acknowledge holidays, but to have real veterans here to speak and share their experience will hopefully make them appreciate it.”

Timothy Wagner, fifth-grader, learned something new during the presentation.

“I learned how all of them had different jobs, and none of them were useless,” Timothy said. “They’re all important.” He said he also was surprised at the number of veterans who had died.

Jacob Roach, fifth-grader, said he learned that flags are put on the caskets of veterans who have passed away. He said he liked the veterans.

“I think I should be one,” he said. He said he is thinking about going into the military when he grows up.

Cheyenne St. Clair, a fifth-grader, has a father in the military now, and said her father had showed her how to fold a flag just like the men did in the presentation. St. Clair said she enjoyed the presentation about veterans very much.

“I think I’d love them all if I knew them,” she said about veterans.

Should the mayor and city department heads accept bids for purchases over $5,000? That’s the question the Ironton City Council... read more