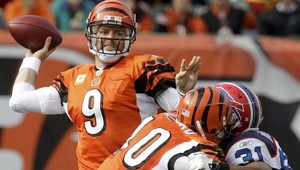 Cincinnati Bengals’ quarterback Carson Palmer (9) throws against the Buffalo pass rush. Despite his efforts, the Bills rallied in the second half to win 49-31 Sunday.

CINCINNATI — Down 31-14 at halftime, the one-win Buffalo Bills got angry.

Angry at the officials for giving Cincinnati another play to kick a field goal. Angry at themselves for getting in such a big hole in front of such a small crowd.

Angry enough to pull off their best comeback in 13 years.

Ryan Fitzpatrick matched his career high with four touchdown passes, and the Bills rallied for their second straight win on Sunday, 49-31 over the bumbling Cincinnati Bengals.

“We could’ve easily folded out tent,” said cornerback Drayton Florence, who returned a fumble 27 yards during the comeback. “It looked like they folded their tents on their sideline.”

Buffalo (2-8) took advantage of Cincinnati’s depleted secondary for its biggest comeback since it overcame a 26-0 deficit and topped the Colts 37-35 on Sept. 21, 1997, according to STATS LLC. The turning point came at the end of the first half, when the clock ran out but the officials ruled Cincinnati had called timeout with 1 second to go.

The Bengals (2-8) used that restored second to kick a field goal for that huge cushion. The Bills complained to the officials while running off the field, then vented to each other.

“In the locker room at halftime, it was louder than what their stadium was the entire game,” safety Donte Whitner said.

Fitzpatrick took advantage of a defense down to four healthy defensive backs by game’s end. Steve Johnson caught three of his touchdown passes, including an 11-yarder that put Buffalo ahead 35-31 early in the fourth quarter. Johnson finished with eight catches for 137 yards.

“It was awesome,” Fitzpatrick said. “Everybody believed the whole game. This was a big win for us. Once you get that first one, everything falls into place.”

With the collapse, the Bengals secured their 18th non-winning record in the last 20 years. The only bright side: Cincinnati fans didn’t get to see it on local television. The Bengals failed to sell out a home game for the first time since 2003, when coach Marvin Lewis was in his first season.

“We are terrible,” receiver Terrell Owens said, taking off his sunglasses for emphasis. “And I don’t blame the fans for booing us. I don’t blame people for not wanting to come and see the performance we’ve put up the last (seven) ballgames.”

Leading up to the game, Owens had dubbed it “the battle of the worst.” On this day, Cincinnati earned the distinction.

“One for the books,” offensive lineman Bobbie Williams called it.

Fitzpatrick’s homecoming got off to a miserable start — three first-half interceptions, though one of them was nullified by a penalty. He was Carson Palmer’s backup for two years, before the Bengals let him go.

Once he settled down, he outplayed his mentor. Fitzpatrick was 21 of 34 for 316 yards and his second four-touchdown game of the season. He has thrown touchdown passes in 11 consecutive games, the longest streak by a Bills quarterback since Flutie did it 12 straight games in 1999.

By contrast, Palmer threw two interceptions during the second-half fade, including one in the end zone as he tried to get the ball to Owens. Palmer was 19 of 34 for 230 yards with two touchdowns — to Owens and Chad Ochocinco — and the two interceptions.

“Terrible. I have no answers for you. I have no sound bites for you,” Owens said, with an edge to his voice. “All I know is right now, we are terrible. And maybe it is — everybody wants to blame me. It’s my fault. Maybe I’m bad luck. But at this point, it’s just unthinkable. Unbelievable.”

Notes: The Bills extended their streak to 10 straight wins over the Bengals, matching the longest in their history. They also beat the Jets 10 straight game from 1987-92. … RB Fred Jackson ran for 116 yards and two touchdowns. … Bengals CB Johnathan Joseph had two interceptions, including a 21-yard return for a touchdown in the first half that made it 28-7. He hurt his ankle and missed the second half. … Safeties Roy Williams (concussion) and Chris Crocker (right knee) also left in the first half.