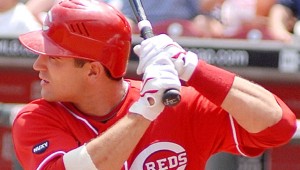 NEW YORK — Joey Votto and Albert Pujols had a long conversation behind the batting cage before a game a few years ago.

“There’s something about a star player of that magnitude kind of pulling you in and saying, it’s OK, we can talk, don’t be a rookie right now, we’re going to talk like men,” Votto said. “I think he made me feel comfortable and a little more confident.”

A first baseman who helped the Reds reach the postseason for the first time in 15 years, Votto received 31 of 32 first-place votes and 443 points in voting announced by the Baseball Writers’ Association of America.

Pujols, the St. Louis Cardinals’ first baseman, was second with the remaining first-place vote, from Joe Strauss of the St. Louis Post-Dispatch, and 279 points after winning the award in 2005, 2008 and 2009.

“I tried to keep my head down for almost a year there, and it was nice to speak to somebody who’s been there and done that when it comes to everything,” Votto said. “For him to give me time of the day and to talk about defensive stuff and ways to improve my game was very generous of him, and he certainly didn’t have to do that.”

“After the season, when I looked at my numbers and at Albert’s numbers, I thought: ’Holy cow! He’s beaten me in a lot of them,”’ Votto said. “He beat me in runs, he beat me in RBIs, home runs, I think a couple others. I beat him in a few of the qualitative stats.

“I don’t know — I think it was a tossup. I think that it was as close as it can get. I’m not going to go on a limb and say, ’Oh, yeah, I played a heck of a lot better than him because I beat him in batting average, but we all know that batting average is kind of an overrated statistic.”’

The NL Central standings probably were the difference.

“Most importantly, we won,” Votto said.

Balloting was completed before Votto went 1 for 10 with one RBI and Philadelphia swept the Reds in the first round of the playoffs.

Now 27, Votto didn’t become a major league regular until two years ago. Following the death of his father in August 2008, he went on the disabled list and missed 21 games the following year partly because of depression and anxiety.

“I had a really, really difficult time I guess getting over the death of my father,” Votto said. “It’s still difficult for me sometimes now. It’s hard when you lose someone in your life that means so much. It was a difficult 2009 and quite a bit less difficult in 2010, and I think that was definitely a big reason why I was able to stay on the ballfield every day and succeed and make progress and feel better about life.”

“I got there and I saw my peers,” Votto said. “I saw the A-Rods and the Pujolses and the Jeters. And I thought, ’Well, I just got 14 million votes for the fan voting and I’m still the small fish in the big pond.”’

The AL winner will be announced Tuesday. Josh Hamilton of Texas is the front-runner.

Ohio State-Michigan rivalry has plenty at stake this time

The Associated Press COLUMBUS — Each year, the players and coaches from Michigan and Ohio State talk about how much... read more