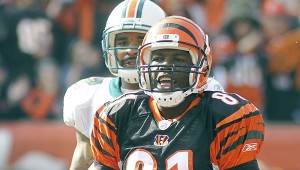 Cincinnati Bengals’ wide receiver Terrelle Owens (81) is all smiles after scoring a touchdown earlier this year against the Miami Dolphins. Owens and the Bengals will play at the New York Jets Thursday. (MCT DIRECT)

The Bengals receiver bristled Tuesday at the mention of Revis, who is expected to cover him when the teams play on Thanksgiving night.

Last January, Revis referred to Owens as a “slouch” and to receiver Randy Moss as a slouch, too, suggesting both receivers failed to give their best when he guarded them last season. Owens had a total of six catches for 46 yards in Buffalo’s two games against New York.

“He came out and said that I was a slouch, myself and Randy,” Owens said. “I heard it. It’s in the back of my mind. As far as me being a slouch, that has never been anything to describe me.”

The Bengals (2-8) get a rematch with the Jets at New Meadowlands Stadium on Thursday night. They’re coming off a 49-31 loss to the Bills that secured their 18th non-winning record in the last 20 years.

The Jets (8-2) beat the Bengals in the last regular-season game last season, when Cincinnati rested its starters. The Jets then came to Cincinnati and beat them again a week later in the playoffs. Revis shut down Chad Ochocinco in those two games, but later described him as a “competitor.”

Owens? Not so impressed.

“Yeah, I called him a slouch last year,” Revis said in a conference call Tuesday. “That’s how I felt at that point in time because of the two games that I did cover him. He didn’t have great games against me.

“But I mean, it’s good that he’s looking forward to it. You know, I wouldn’t expect anything less from him. I’m sure he’s licking his chops for this game and will try to come out and compete.”

Their tweaks go back a ways.

Before their second game last season, Owens suggested he was going to invite Revis to his birthday party, passing along the invite after he scored a touchdown on him. Revis kept his thoughts to himself and got the better of that matchup.

Then, Revis got in his own barb, belittling Owens as the Jets made their run to the AFC title game.

Finally, T.O. gets a chance to give it back.

Asked on Tuesday how he would describe Revis as a cornerback, Owens said, “Just an average corner to me.”

Later, when asked to rank Revis among the cornerbacks who have covered him, Owens said, “In my career? He’s a great corner.” He then caught himself and changed his answer to, “Uh, a good corner.

“No disrespect. He’s only done one thing for one year. You talk about shutdown corners, you need to repeatedly do it year-in and year-out,” he said. “I think he did it one year and everybody made a lot of hoopla about it. I think he started feeling himself, then he wanted to come out and say that I am a slouch.”

The Associated Press COLUMBUS — David Lighty wasn’t thankful for how No. 3 Ohio State played. That’s why the fifth-year... read more