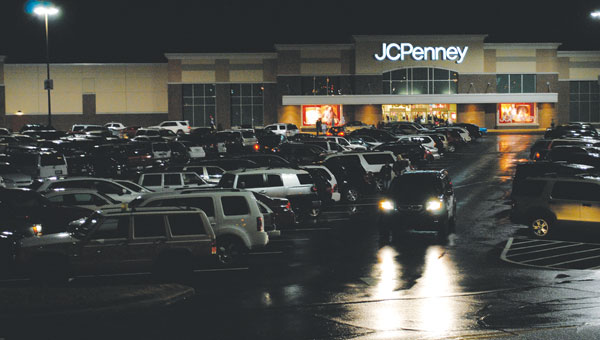 The parking lot outside of JCPenney was packed well before sunrise for Black Friday shopping at the Ashland Town Center. -- The Tribune/Jennifer Chapman

Sitting in the food court of the Ashland Town Center, Ginny Fairchild rested with her feet up on the chair next to hers. Red shopping bags lined her table.

“(We’ve been shopping) since about 4 a.m.,” Fairchild said. “We went to Belk and then JCPenney and back to Belk.”

Fairchild, 64, of Ashland, Ky., and her three grown daughters have a 30-year tradition of shopping on the day after Thanksgiving.

Known as Black Friday, it’s arguably the biggest shopping day of the year and the official start to the holiday shopping season.

“It’s a lot of fun, we do it every year,” Fairchild said.

Several stores opened early to accommodate the crowds. JCPenney in the Ashland Town Center opened at 4 a.m., along with eight other stores there.

“It’s been very busy, a little busier than last year,” JCPenney assistant manager Tim Squires said. He added that when the store opened its doors, there was already a crowd gathered waiting.

“I came to work at 2 and there was already quite a few cars in the parking lot waiting for us.

“Our customer traffic is actually up today over last year.”

Paula Simpson, of Minford, has also made a tradition of shopping on Black Friday for the past five years. At 6:20 a.m. she was still at it after shopping the entire night. 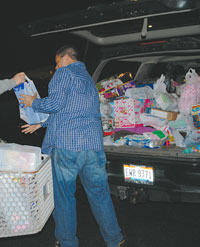 Gary and Alicia Fannin, of Ironton, were loading up their car early this morning after six hours of shopping at Walmart in South Point. -- The Tribune/Jennifer Chapman

“I actually left my house at 8:30 last night,” she said. Simpson first went to Toy’s ‘R’ Us in Huntington before going to the Huntington Mall and later the Ashland Town Center.

She wore a hand painted “I Love Black Friday” t-shirt that she had made a few years ago with friends. This year her finds included toys for her nieces and clothing for herself, she said.

“It’s the thrill of it,” Simpson said. “I don’t even shop for a particular thing.”

Over at the South Point Walmart, Gary and Alicia Fannin of Ironton, had shopped since 11 p.m. when they left the store at 5:30 a.m. They left with two shopping carts full of Christmas presents.

“We have three children, that’s why we’re here,” Alicia said, adding that they would probably be shopping the rest of the day.

“We’re headed to the mall now,” she said.

(AP) Bargain shoppers, braving rain or frigid weather, crowded the nation’s stores and malls in the wee hours of the... read more