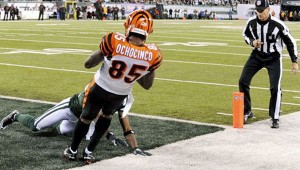 Cincinnati Bengals Chad Ochocinco (85) makes a catch that is ruled out of the end zone during Thursday’s game against the New York Jets. The Bengals lost 26-10. (Courtesy of the Cincinnati Bengals)

The Jets’ Mr. Everything sparked New York to its second-best start after scoring on an 89-yard kickoff return — during which a cleat slipped off — and also had a 53-yard touchdown run in a 26-10 victory over the Cincinnati Bengals on Thursday night.

“He’s a phenomenal athlete,” coach Rex Ryan said. “Everything we ask him to do, he does.”

With or without all of his footwear.

“I think all that running in the background with no shoes on with my brother,” the versatile wide receiver said with a big grin, “that helped.”

Hours after New England beat Detroit to improve to 9-2, New York matched the Patriots. The two meet for the AFC East lead in their next game, a meaty Monday night matchup Dec. 6 at New England.

“We have our work cut out for us, but I think this team will respond,” running back LaDainian Tomlinson said. “They took care of their business and got to 9-2 and we had to take care of our business.”

The impressive start is eclipsed only by the 1986 squad that won 10 of its first 11. And the Jets did it by overcoming a sluggish first half and sending the struggling Bengals (2-9) to their eighth straight loss.

“We’re trying to make the most of it,” Bengals receiver Terrell Owens said. “It’s something different in every phase of the game every week. We find ways to put ourselves in the hole. I’m out of answers.”

New York has beaten Cincinnati three times in less than a year, including the regular-season finale that got the Jets into the playoffs, then in the wild-card game the following week.

Santonio Holmes scored his fourth touchdown in three games on a 13-yard reception from Mark Sanchez after Cincinnati’s Andre Caldwell had a punt deflect off him while he was blocking. Sanchez was 16 for 28 for 166 yards with the TD and an interception.

Smith had three carries for 55 yards, a catch for 23 yards and the long kickoff return, accounting for 200 all-purpose yards.

“We call him ’Slash,”’ Jets safety James Ihedigbo said. “The guy can do anything he’s asked to do.”

It looked as though New York was headed for yet another frenzied finish after consecutive road overtime victories were followed by getting the winning touchdown Sunday with 10 seconds left against Houston.

But it took New York only two plays to go ahead after halftime. Sanchez hit Holmes for 16 yards, then Smith used superb blocks by Dustin Keller and D’Brickashaw Ferguson to speed down the left sideline untouched for a 53-yard TD run.

“I had some tremendous blocks and I would’ve felt sick if I didn’t score because of how well it was executed,” Smith said.

The Jets’ defense followed with a three-and-out, but Sanchez gave it back with a terrible pass to linebacker Rey Maualuga.

“A terrible decision,” Sanchez said. “I should have sailed that into the stands and hit Fireman Ed.”

Maualuga’s 11-yard return to the Jets 37 set up the Bengals in good shape, and they were aided by a 15-yard roughing-the-passer call against Ihedigbo on fourth down.

Faced with another fourth down, Cincinnati sent Aaron Pettrey out for a tying 27-yard field goal, but he was wide left.

Ihedigbo made up for his penalty on the next drive when Steve Weatherford punted and officials ruled it hit Caldwell and Ihedigbo recovered at the 14. Bengals coach Marvin Lewis surprisingly did not challenge the play.

After a 1-yard run by Shonn Greene, Sanchez found Holmes — his favorite target lately — zipping across the middle of the end zone for a touchdown and a 17-7 lead.

“I should be doing backflips in here and celebrating,” Sanchez said. “But as a competitor I know we should have won this going away. We didn’t because of the poor play of the quarterback.”

Pettrey kicked a 28-yard field goal to make it a three-point game with 12:33 remaining.

But Smith, a wide receiver and converted college quarterback, took the ensuing kickoff, got a few nice blocks and had a nice cutback before losing a shoe midway through the return and zipping down the right sideline for a touchdown.

“You want to be a catalyst when you’re on the field,” Smith said. “That’s what it’s really about that when you’re down a little bit, just being able to be a spark.”

Trevor Pryce sacked Carson Palmer in the end zone for a safety, making it 26-10 with 6:52 left.

It was another disappointing loss for the Bengals, who lost to the Buffalo Bills on Sunday in game they led 31-14 but were outscored 35-0 in second half.

“We’re just not winning games,” Palmer said, “and that’s as frustrating as it gets in this league.”

Owens finished with three receptions for 17 yards, while Ochocinco had four catches for 41 yards.

“No point in getting mad,” Ochocinco said. “We’re close. The score might not reflect it. But for a mishap here, a mishap there, we’re in this one.”

Notes: The Jets improved to 4-3 on Thanksgiving, while the Bengals made their debut on the holiday. … Jim Leonhard’s interception of Palmer in the second quarter was the Jets’ first in seven games, New York’s longest drought since 1979. … finished with 49 yards on 13 carries, and is 29 away from passing Eric Dickerson for sixth on the career list. … Palmer was 17 for 38 for 135 yards with a TD and two interceptions.