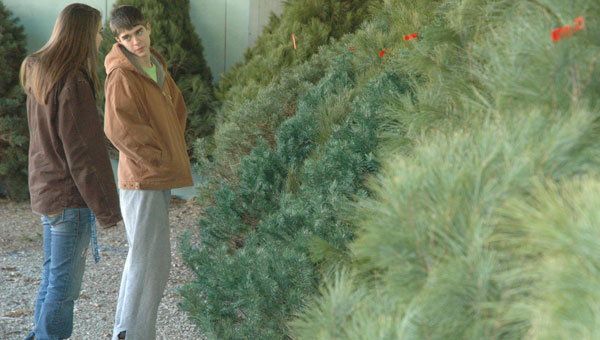 ANDIS — Each year, there are approximately 25-30 million real Christmas trees sold in the United States, according to the National Christmas Tree Association. About 2,500 of those are sold here in Andis at the K. Dickess Tree Farm.

Keith Lee Dickess, Jr., is the owner, after taking over the business from his father, Keith, Sr.. His father started the business, planting the first trees in 1969. It takes about seven years for a tree to grow enough to be sold, so the grand opening of K. Dickess Tree Farm was in 1976.

The tree farm has a total of 13,500 trees right now, including the trees that are still growing. That many trees can bring in a crowd, and Dickess said the biggest weekends for cut trees are the first two right after Thanksgiving. Many customers begin their search for the perfect tree even earlier, with the opening weekend being the first weekend in November.

“A lot of families come out then,” Dickess said. “The reason they come here is it’s a family tradition. We promote a family atmosphere.” He said there are hayrides and inflatables for children the first couple of weekends in November. He said the tree farm has been around long enough now that three generations of customers are getting their trees from them.

This year, they also have a Christmas shop, offering fresh-cut wreaths, garland and other decorations.

“The candy cane garland is really popular this year,” he said.

Bill Klaiber, of Kitts Hill, went with his son, Will, 13, and daughter, Katherine, 16, to decide on a tree this year. He said because his house is large, they have artificial trees as well, but always like to have a real Christmas tree.

“It’s not quite the same without a live tree,” he said. He said his sister got him started getting the trees at K. Dickess Tree Farm more than 20 years ago.

Dickess said the amount of time people spend picking out their trees varies.

“It can be a five-minute thing on the lot, or a two-hour thing on the field, especially if there are kids involved,” he said.

Keith Dickess, Sr., had a piece of advice for anyone picking out a tree.

“Whenever you come to a tree and you think, ‘This one will be okay,’ that’s the one to go with,” he said. He said often people find a tree they like and keep looking only to go back to the original tree.

Terry Barker, of Pedro, and his son Tony Barker, agree with that statement.

“Every one we’ve ever bought, we’ve always went back to the first tree,” Terry Barker said.

Tony Barker said they have been going to K. Dickess Tree Farm for 10 years to pick out a tree, always on the day after Thanksgiving.

Angie Ferguson, her son Austin, and her mother Mary Ann Bezio, of Huntington, W.Va., also make their trip to the tree farm the same time each year.

“That is a definite,” Angie Ferguson said. “It’s always right after Thanksgiving.” Ferguson said they have been coming to the tree farm for five or six years, and heard about it by word of mouth.

“We had no idea it was here,” she said. She said it normally takes them about a half hour to pick out the tree they want, but she usually likes the white pine. She said she usually looks for the fullness of a tree and one that has a perfect shape.

Dickess said they have several types of trees to choose from including Colorado blue Spruce, Fraser fir, Canaan fir, Scotch pine and white pine. He said the Colorado Blue Spruce is popular because it has a similar look as the Korean fir, but has stiff limbs that are good for hanging ornaments. Dickess has some tips for people looking for a live tree.

“They all have their different attributes,” he said.

Another important tip is to know your height limits.

“Please know your ceiling heights, or you might have a Griswold thing happen,” he said, referring to a scene in National Lampoon’s Christmas Vacation when the Christmas tree was much too high for the room.

The tree farm will remain open until Dec. 23.

The parking lot outside of JCPenney was packed well before sunrise for Black Friday shopping at the Ashland Town Center.... read more