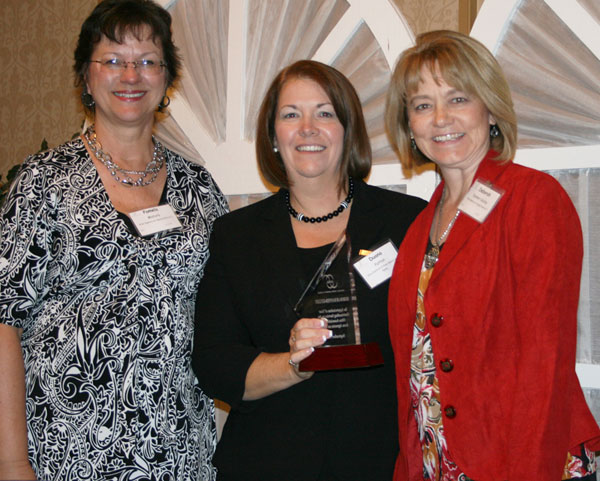 GALLIPOLIS — Debbie Gulley, director of long-term care programs at the Area Agency on Aging District 7, Inc. (AAA7), was recently recognized at the state level by the Ohio Association of Area Agencies on Aging (o4a) for her significant contributions to Ohio’s aging network.

Gulley, who has been with the AAA7 since 1992, was recognized at the o4a’s Annual Conference that was held in Columbus and attended by staff and representatives from the twelve Area Agencies on Aging throughout the state.

Gulley was honored for her hard work and participation with many of o4a’s committees and projects, in addition to her valuable insight and expertise.

The award, which is a surprise to the recipient until the announcement at the Conference, was certainly something Gulley did not expect when her name was called. “I was completely shocked – it was a total surprise,” Gulley shares. “I feel so privileged to serve with many people through the entire aging network in Ohio who go above and beyond to serve seniors to the best of our abilities.”

Gulley, who is a 1982 graduate of the Holzer School of Nursing, received a bachelor of science in nursing from Ohio University in 1990.

Prior to her joining the AAA7 in 1992 as a PASSPORT case manager, she had worked in the nursing home industry as a Director of Nursing. Gulley was named the long-term care services director at the AAA7 in 2008, and prior to, held a supervisory role for agency programs including residential state supplement, care coordination, assisted living and PASSPORT.

Gulley resides in Wheelersburg with her husband, Joe, who works for Cunningham Asphalt. They have two sons; Kevin, 24, who attends medical school at Wright State University; and Alan, 22, who is employed as an electrician.

She is the daughter of Tom and Beverly Danner, who are former residents of Gallia and Lawrence counties.

“I am so proud to work for the Area Agency on Aging District 7,” Gulley says. “We have been able to touch the lives of so many people in our ten counties with the helpful services we provide.”

Everyone within the AAA7 organization is so mission-driven. It is so great to be a part of a group of individuals who give their best everyday so that we, in turn, can give seniors and those with disabilities choice and independence with their long-term care decisions.”

The Area Agency on Aging District 7, Inc. provides services on a non-discriminatory basis. These services are available to help older adults and those with disabilities live safely and independently in their own homes through services paid for by Medicare, Medicaid, Veterans Administration, other federal and state resources, as well as private pay.

Those interested in learning more can call toll-free at 1-800-582-7277 (TTY 1-888-270-1550). Here, individuals can speak directly with a nurse or social worker who will assist them with information surrounding the programs and services that are available to best serve their needs. Information is also available on www.aaa7.org.

Displays of Christmas decorations that range from a rocking horse to old man winter to Santa’s Village can be seen... read more