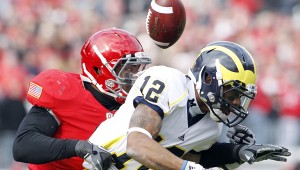 COLUMBUS — In the 107 editions of the Michigan-Ohio State rivalry, things have never been this bad for the Wolverines.

“I’m ticked, he said, moments after his Wolverines got blown out 37-7 on Saturday — an unprecedented seventh straight loss to the Buckeyes.

“What do you want me to do? Hold hands with all the Buckeye fans and sing ’Kumbaya’?”

Might as well. Nothing else seems to work for the Wolverines these days against their archrivals. They fell to 0-3 against Ohio State under Rodriguez, and have been outscored 100-24 in that span.

It was enough to make even Ohio State coach Jim Tressel offer some consolation.

“You know, we all have our ups and downs,” he said after improving to 9-1 against Michigan. “But Michigan will be back. You don’t have to worry about that.”

Jordan Hall broke things open with an 85-yard kickoff return and the Buckeyes defense shut down the Wolverines’ vaunted offense. Ohio State (11-1, 7-1) picked up two celebration penalties after touchdowns but had a lot to celebrate: A share of a record-tying sixth Big Ten title and, most likely, a Bowl Championship Series bowl berth.

Some say the Buckeyes take the rivalry more seriously than do the Wolverines.

“First and foremost, it’s important to never lose to Michigan as a Buckeye, which is unusual,” said linebacker Ross Homan. “To end up with five rings from championships is another accolade. It’s a dream come true.”

Meanwhile, Michigan (7-5, 3-5) will prepare for a second-tier bowl game and hope for better days. The Wolverines started more freshmen (four) than seniors (three) on Saturday.

“I worry about my future everyday,” said Rodriguez, asked about rumors that his job was in jeopardy. “It’s been a lot slower (coming) than I wanted, a lot slower than our fans wanted. I don’t blame them for that. But I’m not deterred by it.”

The crowd serenaded the teams with “We Don’t Give A Damn For the Whole State of Michigan” throughout the final quarter, long after the outcome had been decided.

It was the second-most lopsided Ohio State victory in the series since 1968, eclipsed only by a 42-7 win the last time the game was played in Columbus — also with Rodriguez on the sidelines — in 2008.

Ohio State players, dressed up in bright scarlet helmets and shoes for the game, were twice flagged for forming an “O” with their gloved hands while celebrating after touchdowns. The crowd of 105,491 booed lustily after each penalty.

The rest of the afternoon was mostly cheers.

Terrelle Pryor had TD passes covering 7 yards to Dane Sanzenbacher and 33 yards to DeVier Posey and Dan “Boom” Herron finished with 175 yards on 22 carries. Herron also tied a record for longest run from scrimmage in 88-year-old Ohio Stadium when he went 89 yards in the third quarter. He actually raced 98 yards untouched, but the touchdown was called back because Sanzenbacher held a defender as Herron was heading into the end zone.

Pryor completed 18 of 27 passes for 220 yards with one interception. Up 24-7 at the half, most of the drama was drained from the game as Tressel elected to stick to the ground game while improving to 9-1 against the Wolverines.

“It’s great to get victories with these guys,” Pryor said. Then he echoed his coach: “There were lots of ups and downs, but way more ups.”

Michigan had drawn to 10-7 on Michael Shaw’s 1-yard plunge after Robinson had led an 80-yard march down the field. But then Hall’s return flipped the game around.

“Jordan’s kickoff return was huge when it came because they had just scored,” Herron said.

Michigan’s sterling quarterback, Denard Robinson, was hampered by an injured left (non-throwing) hand. He played little more than a half, running for 105 yards on 18 attempts and completing 8 of 18 passes for 87 yards. He came into the game second nationally in total offense at 343 yards a game.

Ohio State’s defense — with backup cornerback Travis Howard intercepting one pass and recovering two fumbles — controlled a Michigan offense that came in averaging 37 points and 515 yards per game. The Wolverines ended up with 351 yards — less than 100 in the second half.

Now the Buckeyes wait to see what bowl game they’ll go to. Most signs point to the Sugar Bowl against an SEC opponent.