Roar of crowd tells Delhomme Browns get win over Panthers 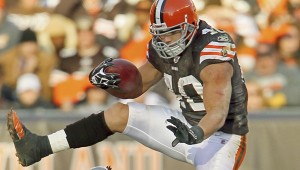 CLEVELAND — Jake Delhomme couldn’t bear to watch, so he listened.

As John Kasay, his former clutch Carolina teammate, sent a field goal sailing toward the uprights and another last-second win, Delhomme sat and waited for the crowd to tell him the outcome.

Kasay’s 42-yard field goal attempt grazed the left upright as time expired Sunday, allowing the Cleveland Browns to escape with a 24-23 win over Carolina and giving Delhomme a little satisfaction against the team that cut him.

“There are two emotions in this league,” Delhomme said. “Pure joy from winning and the misery of losing. It’s good to be on this side.”

Kasay, one of the most accurate kickers in NFL history, got the chance at his 14th career game-winner after rookie quarterback Jimmy Clausen drove the Panthers (1-10) to Cleveland’s 25, completing a sideline pass to Brandon LaFell with five seconds left.

After the play was reviewed by officials, Kasay’s kick went left, ending another tight game for coach Eric Mangini and the Browns (4-7).

“I was the one who failed,” Kasay said, accepting blame for Carolina’s fourth straight loss. “This is one of those days where they did everything they needed to do to win. I was the one who let them down. There’s no other way to cut it.”

Cleveland workhorse Peyton Hillis rushed for 131 yards and three touchdowns, and Delhomme passed for 245 yards in his first start at home for the Browns, who signed him in March after he was released by Carolina.

Before Kasay missed, the Browns were in danger of adding an embarrassing loss to a string of tough setbacks. Last week, they went down in Jacksonville despite forcing six turnovers and losing rookie quarterback Colt McCoy with an ankle injury.

This time, the Browns got lucky and improved to 2-5 in games decided by seven points or less.

“It was an incredible range of emotions,” Browns tackle Joe Thomas said. “The craziest game I have ever been involved in.”

The win also got a rusty Delhomme, who had missed eight games with an ankle injury, off the hook after he threw a costly interception in the second half that Carolina’s Captain Munnerlyn returned 37 yards for a TD to pull the Panthers within 21-20.

Delhomme bounced back from two interceptions — on his first two passes — in the second half by going 5-for-5 on Cleveland’s drive in the fourth that set up Phil Dawson’s 41-yard field goal. Holder Reggie Hodges did a nice job controlling a high snap before Dawson’s kick made it 24-23 with 2:42 left.

Clausen tried to respond, but threw an interception directly to rookie cornerback Joe Haden with under two minutes left.

The Panthers appeared to be done, but used their timeouts wisely and got the ball back at their 5 with 59 seconds left.

On third-and-10, Clausen completed a pass to running back Mike Goodson, who broke several shoddy tackles for 32 yards. After spiking the ball, Clausen, who sat out last week with a concussion, found LaFell near the Panthers’ sideline.

LaFell alertly rolled out of bounds to stop the clock, but the Panthers had to sweat out a review in case the officials determined time should have expired. Kasay trotted out for the game-winner, and as he did, Dawson believed the Browns were doomed.

“I didn’t have a good feeling,” Dawson said. “My only hope was good old Cleveland Browns Stadium. There are no gimmes here. I expected it to go through. I was hoping for a block, because I figured if the ball clears the line of scrimmage, it’s going through.”

Carolina has 10 losses for the first time in Fox’s nine seasons, and the latest put his job in further peril.

Hillis had TD runs of 9, 5 and 6 yards in the first half. He has 11 rushing TDs, joining Hall of Famers Jim Brown and Leroy Kelly as the only Cleveland backs to have that many in one season. Hillis scoffed at any suggestion he’s in their company.

“That’s absurd,” he said. “Those guys are legends and I’m a nobody.”

Browns fans strongly disagree. The down-home, Arkansas country boy has become a cult figure in Cleveland, which wasn’t sure what it was getting when the Browns traded quarterback Brady Quinn for Hillis, who loves to hunt wild boars when he isn’t destroying would-be tacklers.

Hillis’ third TD made it 21-7 in the second. Rampaging right, he flattened safety Charles Goodson at the 2 before cruising into the end zone. He dropped to a knee, flexed his biceps and pointed to the sky just a few feet from where a “Peyton’s Place” banner hung.

Delhomme wasn’t seeking revenge against the Panthers, who waived him in March, but got some anyway. He finished 24 of 35, did some good things, and some bad.

Notes: Hillis has six games left to break Brown’s team record of 17 rushing TDs in a season, set in 1958 and 1965. … Panthers RB Jonathan Stewart finished with 98 rushing yards. … Kasay is eighth on the career points list (1,796) and seventh in field goals (426). … Carolina was the only team Cleveland had never beaten. The Browns are now 1-3 vs. the Panthers.

The Associated Press COLUMBUS — It figures in this Bowl Championship Series era that No. 6 Ohio State won’t know... read more