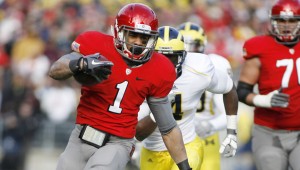 PARK RIDGE, Ill. — Michigan’s Denard Robinson was selected the Big Ten’s offensive player of the year by coaches and media after becoming the first quarterback in NCAA history to rush and pass for more than 1,500 yards in a season.

Purdue defensive end Ryan Kerrigan was picked as the conference’s defensive player of the year. Michigan State’s Mark Dantonio was selected coach of the year by the media with the Spartans earning a school-record 11 wins and a share of their first Big Ten Championship since 1990. And Wisconsin had a pair of winners, with running back James White chosen freshman of the year by coaches and media and tackle Gabe Carimi getting offensive lineman honors from the coaches.

Robinson’s award comes at an uncertain time for Michigan.

Coach Rich Rodriguez’s job status is up in the air with the Wolverines at 7-5, although he helped them qualify for a bowl for the first time in his three seasons running college football’s winningest program.

A big reason was Robinson, the eighth Wolverine and first since Braylon Edwards in 2004 to take top offensive honors. The only other Michigan quarterback to be selected was Jim Harbaugh (1986), a popular choice to replace Rodriguez.

Robinson’s 1,643 yards rushing are a conference record for quarterbacks, and at 136.9 per game, he ranks fourth nationally and leads the Big Ten. The sophomore has also thrown for 2,316 yards.

Kerrigan, a senior, joins tackle Jeff Zgonina as the lone Purdue players to take the defensive honors and is also the first Boilermaker to be selected defensive lineman of the year by the coaches. He leads the Big Ten and ranks second nationally in sacks per game (1.04) and has 12.5 this season. He also leads the country with 2.17 tackles for loss per game and has 26 on the year.

White, the second straight Badger to take freshman honors after linebacker Chris Borland was selected last season, has 1,029 yards rushing and is averaging 7.0 per carry. He’s running behind a line led by Carimi that has helped Wisconsin average 43.3 points.

For Dantonio, this hasn’t been an easy season. He suffered a mild heart attack in September, but the Spartans kept their focus and wound up 11-1 and 7-1 in conference play.

The Associated Press CINCINNATI — Even when the Cincinnati Bengals are really bad, they find ways to ruin someone else’s... read more