Attorneys dispute care given to patient 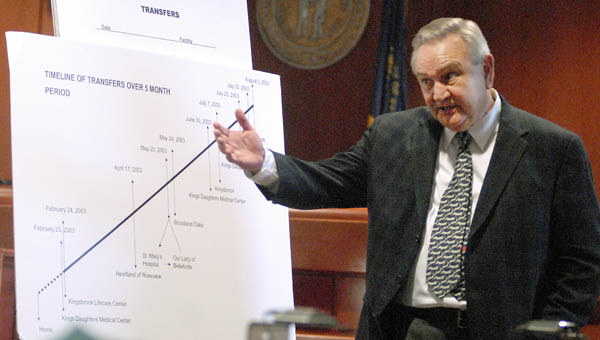 An attorney for Woodland Oaks presents to the jury at the Boyd County Justice Center in Catlettsburg, Ky., charts and graphs pertaining to the care given to former resident Mabel Hague over a five month period Tuesday. THE TRIBUNE/JESSICA ST. JAMES

CATLETTSBURG, Ky. — Opening statements in the case of a Proctorville physician suing an Ashland, Ky., nursing home offered two different versions of the level of care received at the facility.

Dr. Matthew Wilson, an allergist and owner of Tri-State Allergies, is suing Woodland Oaks for what he alleges was negligent care given to his aunt, the late Mabel Hague. Hague was a resident at Woodland Oaks from May 24, 2003 to June 30, 2003. She died on Aug. 3, 2003.

This is the third time the civil case has come before Boyd Circuit Judge C. David Hagerman. The first two ended in mistrials. The complaint, which was originally filed in September of 2004, alleges that as a consequence of the care Hague received at the nursing home, she suffered from dehydration and malnutrition and had a urinary tract infection.

“Nursing homes are not allowed to needlessly endanger others,” Tom Harmon of the Tampa, Fla., law firm of Davis and Harmon, told the jury.

Harmon is one of three attorneys representing Wilson.

“Nursing homes must give patients adequate food, water and prevent infections,” he said.

Hague, 90, at the time she entered Woodland Oaks, was placed there for rehabilitation after suffering a second hip fracture, both occurring in the same year.

According to documents and charts from the nursing home, Woodland Oaks stated Hague had fair potential to make significant improvement, Harmon said.

The attorney then detailed how according to a medical calculation, Hague should have received daily 1,770 cc of fluids. However, he stated charts show she on average received between 600 and 700 cc of fluids daily.

When Hague entered Woodland Oaks, she weighed 132 pounds and was 5 foot 6 inches. By the end of her stay, her weight dropped to 116 pounds when she was taken from the facility on Wilson’s orders to King’s Daughters Medical Center.

“She never recovered from this downward slide,” Harmon said.

However Larry Forgy, the Frankfort-based attorney and former Kentucky gubernatorial candidate, counted that Hague came to the facility with numerous health problems.

“She was in the grip of eternity,” Forgy said. “She was 90. She had a lot of problems, not because we didn’t care. She had her four score and 12 … Miss Mabel had many chronic conditions.”

The defense contends that the weight Hague showed when she entered Woodland Oaks was larger than her usual weight because of water retention from congestive heart failure.

“She was a small lady … 115 pounds,” Forgy said. “She had a consistent history of chronic urinary tract infections … I’m not trying to be smart (but) you must see that Mr. Harmon thinks she was on the gymnastic team when she came to us. … When Miss Mabel came to us, she was in serious condition.”

However those contentions were refuted by the plaintiff’s first witness, Dr. Kathryn Locatell, a California-based geriatric specialist who testifies in criminal abuse cases for the U.S. Department of Justice. Locatell, who charged $300 an hour for her work in this case, said Hague did not receive basic bedside nursing care.

“Mabel Hague was neglected while at Woodland Oaks,” she testified via a video deposition.

The doctor said she would have expected Hague’s condition to have stabilized.

“I would not expect her to be dead in two months,” she said.

Wilson is seeking a maximum of $12 million in damages.

PROCTORVILLE — The children in Mollie Fisher’s special needs class get a chance to make the holidays better for others.... read more