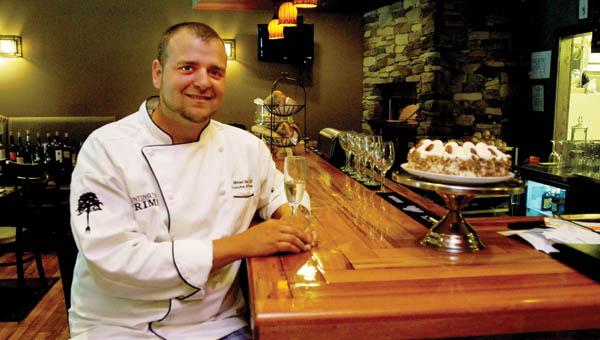 If great cooking is all in the wrist, then Michael Bowe must have some pretty fine carpal bones. With a simple flick of those Culinary Institute-trained hands, Bowe tosses into a black cast iron skillet a silver skinned trout so fresh it practically drips the West Virginia waters it once called home. Making sure its grapefruit pink side is up, he lets the sizzling magic begin.

It’s such skill and attention to detail that has brought to Huntington the Tri-State’s latest “in” place to dine. That and a strong definitive philosophy of what a restaurant should be.

Huntington Prime opened in a shotgun-long hideaway on downtown Fourth Avenue earlier this year where wall coverings of taupe and dark greens work in tandem with accents of red to showcase a wood-burning fireplace and highly polished light oak bar.

It’s a restaurant where ambiance works synergistically with cuisine to create a unique dining experience. And the packed houses of appreciative diners show Huntington Prime has a bright future.

“I wanted the city of Huntington to have a place where they could go and eat with friends and family and feel like they knew where the food came from,” Bowe said as he took a quick break between the lunch and dinner crowds to talk about his venture.

“We specialize in local cuisine, local food. This is fine Appalachian cuisine that is very carefully prepared. Trout from Bluefield, pork from Putnam County.”

Locally bought meats, fish, produce and herbs equates to a menu that is both elegant and unique, just the way Bowe wants it.

Lamb shanks from Waverly, W.Va., promise to be slow cooked with garlic, onions and oregano, then drizzled with blackberry and balsamic reduction sauce just before the plate comes to the table.

Bowe deals with six to eight farmers on a regular basis to get the freshest produce he can. Like homegrown eggplant stuffed with boursin cheese, couscous, sun-dried tomatoes and parmesan cheese. Then it’s dusted with panko bread crumbs and topped off with house made pungent marinara sauce.

With the strapping build of a triathlete and a wicked impish grin, Bowe offers a resume of a man born to cook. Growing up near the New River Gorge region of West Virginia, he found the kitchen a place where he was comfortable when he was 10. That love of food and creating dishes inspired him to take the full curriculum at the Culinary Institute of America, the premier culinary school in the world, in Hyde Park, N.Y.

For the past 12 years he has called Huntington home coming here after a stint as the corporate executive chef for Hartman and Tyner, a Miami-based parent company of a chain of casinos.

Bowe left Hartman to earn a management degree from Marshall University and begin teaching at Marshall’s culinary school. Teaching let him scout out his dream and serendipitously find his right hand man in the restaurant, his chef de cuisine, Bruno Young, a onetime student of Bowe.

But Young isn’t alone in the kitchen as eight other chefs, plus pastry chef Cheri Godfrey, perform in unison like a seasoned orchestra creating night after night symphonies of dining pleasure. 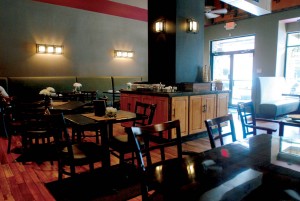 It’s not simply the food side of the restaurant that consumes Bowe. He knew what he wanted as far as ambience and he got it.

“It is very a comfortable, very modern West Virginia environment to let people feel like they were going to a friend’s cabin,” Bowe said. “I would be completely thrilled if I could put in a glass ceiling so people could see the blue skies.”

It all goes together to show how Bowe sees Huntington Prime, more than a business, more than a place for fine dining.

From the restaurant’s treefork logo representing the farm-to-table way to great cuisine to the manner a reduction sauce is stroked across a filet mignon or a pan of jumbo seared scallops, it’s all about the delight of the senses.

It’s art that wants to satisfy both body and psyche.

Saturday: Dinner only, 5 to midnight.

For Barbara Delligatti, her interest in art began as a hobby but has been painted onto the canvas of her... read more