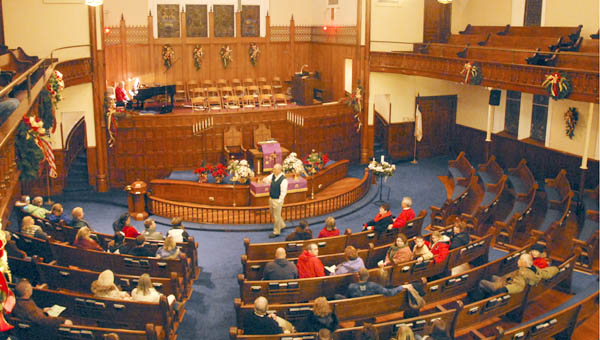 Not even snow that was falling by Saturday afternoon seemed to bother event goers of the annual Candlelight Christmas Tour that evening.

Over 100 people–most who were bundled in coats, hats and scarves– joined the Lawrence County Historical Society’s walking tour of Ironton’s downtown historical churches, in spite of the weather. 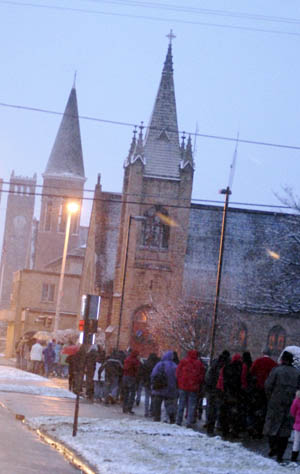 “We’re picking up some at every church,” Debbie Rogers, a member of the historical society and organizer of the event, said. “Over a 100 people, that’s pretty good.

One of the tour’s regulars was Joe Fletcher, who has participated for the past five or six years, he said.

“It’s just kind of tradition,” Fletcher said. “I think it goes along with the history of the city. All the churches in town are nice and they’ve got a lot of history to them. They were started by some of the founding fathers of Ironton.”

The tour started at First Baptist Church at Fifth and Vernon Streets. One of the oldest congregations in the city, the church’s building is one of the newest. It was built in 1959. Christ Episcopal Church was built in 1896. Large stained-glass windows depicting scenes of Jesus mark the front and the back of the church.

Chartered in 1850, First Presbyterian Church moved into its current structure two years later in 1852. The church is one of only two with a pipe organ.

Each of the churches hosted a short Christmas service. In all, the tour included eight of Ironton’s oldest churches and concluded with refreshments at the Lawrence County Historical Museum.