Giving’s a way of life for Rome children 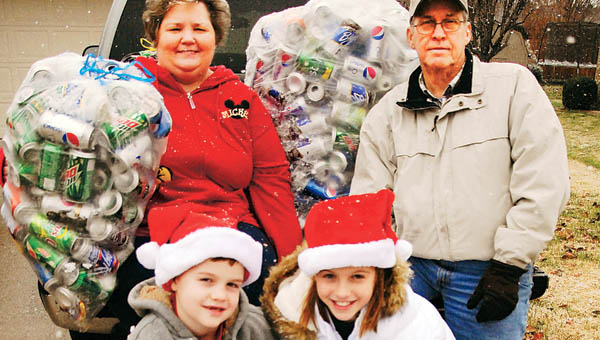 Six-year-old Landon Roberts, left, with his sister Olivia, 10, with her grandparents Connie and Bob Bowen are surrounded by numerous collected cans. Four years ago the Bowens decided to teach their grandchildren the gift of giving by taking the money earned from collecting cans and helping to provide for needy children in the area. The family calls their project Kans for Kids. This year the Roberts children have taken on two children from the Angel Tree at the Salvation Army.

ROME TOWNSHIP — For Olivia and Landon Roberts, generosity was a trait learned early in life. For the past three Christmases, the Fairland Elementary school students have used the money they raised collecting aluminum cans to buy presents for children less fortune than they are.

This year, as well, the two plan to buy presents for two children through the Salvation Army.

“(We do it) to help kids who don’t have a lot of things at Christmas,” 10-year-old Olivia said.

The project, which the family calls Kans for Kids, is a year-round effort for the children, who with the help of their grandparents, collect the cans and take them to a metal recycling facility in Huntington three times a year.

In all this year, the brother and sister raised around $200 by collecting more than 400 pounds of aluminum, or at least 80,000 cans, Bob Bowen, Olivia and Landon’s grandfather, said.

Bowen said he wanted the children to help out in a way that caused them to work for it. He and his grandchildren are considering hosting rummages to raise even more money next time.

“We’ve tried to think of ways to increase the number of people we can help,” Bowen said.

Olivia and Landon say their grandparents taught them what it means to help out people.

Besides collecting and selling the cans, the two also shop for the presents and wrap them.

Bob Bowen said he is proud of his grandchildren for their efforts.

“They’ve learned the gift of giving and that’s the most important thing in life.

“They’re excited about it. They want to do it and it just means so much to their father and me.”

No injuries in Monday accident