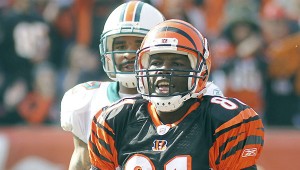 Cincinnati Bengals’ wide receiver Terrell Owens turned 37 years old on Tuesday but said he has no plans of retiring after this season ends. (MCT DIRECT)

CINCINNATI — Terrell Owens didn’t have a big celebration for his 37th birthday. Some family, a few friends, a quiet day.

“Didn’t really do much,” he said Wednesday. “Didn’t leave the house, really.”

The Bengals receiver turned 37 on Tuesday, entering uncharted territory for most receivers. It might be the least-important number in Owens’ career full of mighty big ones.

He’s having a throwback season in Cincinnati, reviving a career that seemed to be approaching an end last summer. The Bengals were one of the few teams interested in giving him another chance to show he can still be a disruptive receiver. With four games to go, he’s one of the best around.

Owens leads the Bengals (2-10) in receiving and scoring. He’s tied for fourth in the NFL with 71 catches and he’s fifth with 961 yards. He leads the Bengals with nine touchdowns. Every week, he moves a little higher on the career lists, approaching numbers that only Jerry Rice has attained. And, it looks like he’s got a lot left.

“At least two or three more years,” he said. “Just depends on if the body holds up and if I feel up to it every week and every year. The thing getting me through now is I still love the competition. It’s not about proving everybody wrong.

“Earlier in the year, that was being mentioned, that I was trying to prove critics wrong. It’s just that they were inaccurate of my assessment of my abilities and my play, considering the situation that I was in last year.”

Owens was a free agent after a so-so year in Buffalo, where the offense was in flux and Owens got a lot of attention from opposing defensive backs.

Needing a receiver, the Bengals gave him a one-year deal on the opening day of training camp. He teamed up with close friend Chad Ochocinco in Cincinnati, and has outperformed him all season. Ochocinco ranks second on the team with 59 catches for 724 yards and four touchdowns.

He’s even been careful in his comments as the Bengals fell into one of the longest slumps in franchise history. They’ve lost nine straight — one shy of the club record for a season — heading into their game Sunday in Pittsburgh (9-3).

All the talk about being over the hill has vanished.

He’s approaching more big numbers on Sunday. With 39 yards against the Steelers, he’ll become the third player in league history to have 10 seasons with 1,000 yards receiving, joining Rice and Randy Moss. His next touchdown will make him the fifth player to score 10 or more in nine seasons.

— Owens’ touchdown catch during a 34-30 loss to the Saints on Sunday was his 153rd, matching Moss for the lead among active players. He has 156 touchdowns overall, fourth on the career list. Rice, his former teammate and mentor in San Francisco, is first with 208.

The numbers, like those birthdays, don’t get much fanfare as they pile up. Not from Owens, anyway.

“It’s funny for me because it seems like every week we play, I am reaching some kind of milestone and I am not really even aware of it until after the game,” he said. “I will get some tweets or a text message or email congratulating me and I am like, ’For what?’ They will be quick to point out what I have done. For myself, I think I have accomplished a lot with my career except for winning a Super Bowl.”

Owens came to Cincinnati in part because he thought the defending AFC North champions had a chance to go deeper in the playoffs this season and maybe even get him to his second Super Bowl — he was on the losing side with Philadelphia in the 2004 season.

He’s had a good year while the rest of the team has imploded. He’ll be a free agent after the season, along with several other key players and coach Marvin Lewis, who has turned down a contract extension.

When he hits the market this time, no one can say he can’t play.

“Again, what I have done this year is not surprising,” Owens said. “Honestly, whatever my stats are now, they could have been better.”

The Associated Press GAINESVILLE, Fla. — With his wife and two of his three children sitting a few feet away,... read more