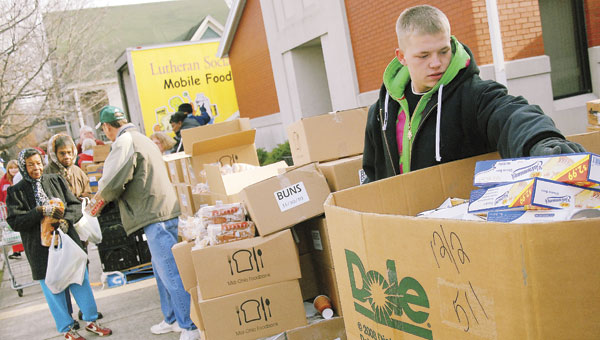 At the annual Christmas with Dignity Event at the St. Paul Lutheran Church Saturday, roughly 600 area residents benefited from the event as boxes of food were passed out for the upcoming holiday season.

The temperatures may have been chilly but the enthusiasm was high as 30 volunteers from St. Paul Lutheran Church came out to unload and stack boxes and help in any way they could at this year’s Christmas with Dignity.

Terry Null, a member of the church, has given up his Saturday morning each December to do the heavy lifting as trucks arrive at the church’s doorstep laden with food.

“It’s the satisfaction, to see the little children and their families have a meal,” Null said. “It is a good feeling to be a part of this.”

This is the seventh year for the Christmas with Dignity and the third for it exclusively as a food giveaway. When the program originally started, toys and other presents were offered.

“The way the economy has turned,” the Rev. David Ritchie, pastor of the church, said was the impetus for the change. 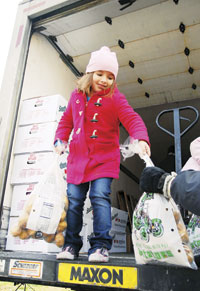 Seven-year-old Hope Rowland lends a hand Saturday at the St. Paul Lutheran Church in Ironton handing out potatoes to awaiting hands during the annual Christmas with Dignity event. Hope came from Lexington, Ky., and was more than pleased to help out at the event.

“We used to give toys but with the need so great with hunger, this is the best route to go,” Null said.

This year, as in past years, 600 boxes of food were given out to those who had pre-registered.

The main food boxes came from $18,000 in donations from the local congregation and its partner at All Saints Lutheran Church in Worthington. Those boxes were filled with chickens, vegetables and other staples. Also given out from the Lutheran Social Services were extras including fresh blueberries, loaves of breads, a dessert and bags of celery.

Almost an hour before the giveaway was to begin at 10 a.m., lines were forming by the church’s back door. Families with children, the elderly and individuals all stood waiting.

“These are the days I live for,” Ritchie said. “As a church we are called to do the mission of Christ. This is how we show Christ’s love. With two spouses making minimum wage, they can’t make it.”

Ritchie said both his church and the congregation at All Saints have what he called a passion for feeding the hungry.

It was the first year for Emmalee Huff to volunteer for the morning. And she was undaunted when she had to climb up into the semi-truck to help dispense the heavy boxes of food.

“I like this. I have the heart to help other people out,” Huff said. “This is my Christmas gift to them. I am able to bring joy and light into their lives.”

The City of Ironton and the Ironton Fire Department want to make sure the homes in Ironton are as safe... read more