Model UN teaches students about world around them 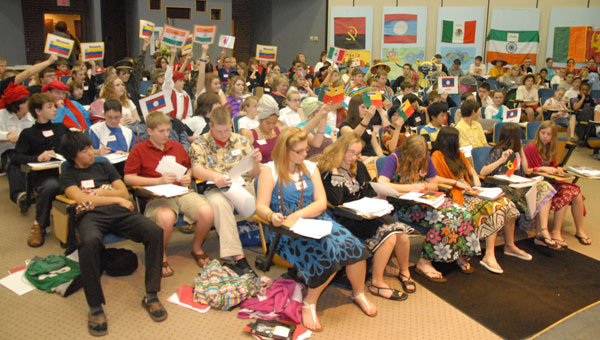 Students from Lawrence County gather at Ohio University Southern to participate in the 2010 Lawrence County Model United Nations. Students represented countries such as Bolivia, Laos, Japan, India and many others. They addressed issues such as polio, landmines, child mortality, human rights and much more.

Jessie Forrest was right. Even though it looked daunting for her team at this year’s Model United Nations, she knew the power of persuasive words.

And the South Point talented and gifted students demonstrated that power.

Friday at Ohio University Southern Jessie’s team represented the country of China with the resolution before the UN to revamp the laws for adoption for Chinese orphans.

Decked out in Mandarin pajamas and conical straw coolie hats, these representatives of China presented their arguments on why their TAG colleagues should support helping the orphans.

However, when the resolution went to debate, more students came forward wanting to speak against the proposal. As she and her teammates went around caucusing with the other “delegates,” Jessie wasn’t about to give up.

“It may well pass,” she said. “We may change some minds.”

And change minds they did as they watched the chair announce that their resolution has passed.

This was the 20th year for the Model UN with TAG teams coming from Chesapeake, Fairland, Rock Hill, South Point, Ironton and Dawson-Bryant school districts.

Symmes Valley sent a team to observe with the idea of coming next year.

“This is one of the most valuable things we do as a county,” Terry Montgomery Chesapeake TAG teacher, said.

“They get to argue, but they have to argue intelligently with facts. When you argue productively, that is a valuable lesson.”

It’s the debating that appeals to Shelby Dalton from Rock Hill, whose team represented Mexico. 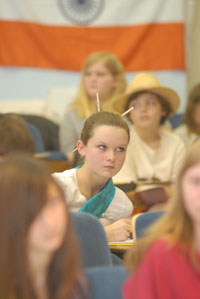 s thePaige Looney, a student at Fairland Middle School, represent country of Laos. She listens as the country of Croatia proposes a resolution that the United Nations provide standardized mandates for contributing nations to balance the risks associated with war.

“When I understand, it feels like I am learning,” she said.

This was the first time for Dawson-Bryant students to attend the Model UN.

“I really like it,” Molly Saunders said. “You learn about different countries. It is challenging.”

A couple of weeks ago was one of those days. An owner brought in a new puppy. She was cute... read more