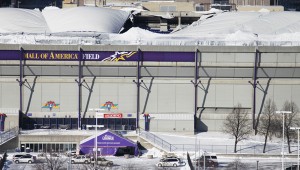 The Metrodome roof collapsed under the weight of snow from a winter storm in Minneapolis, Minnesota, Sunday. The roof collapse has forced the game between the New York Giants and Minnesota Vikings to be moved Detroit and will be played Monday night. (MCT DIRECT)

MINNEAPOLIS — The inflatable roof of the Metrodome collapsed Sunday after a snowstorm that dumped 17 inches on Minneapolis. No one was hurt, but the roof failure forced the NFL to shift the Vikings-Giants game to Monday night at Detroit’s Ford Field.

The commission that operates the Dome wouldn’t speculate on how long a repair would take, but facilities manager Steve Maki said he was optimistic it would be done in time for next Monday’s game against the Chicago Bears.

It was the fourth time the Teflon roof has failed in the Dome’s history, but the first time since 1983. Heavy snows also caused the previous failures. The game between the Vikings and New York Giants had already been postponed a day, to Monday, when Saturday’s blizzard kept the Giants from getting to Minneapolis on time. Work crews attempted to clear snow off the stadium roof Saturday night but were pulled off due to safety concerns.

The roof collapsed about 5 a.m. Sunday after a snowstorm dumped 17 inches of snow.

“There were no injuries, which we’re thankful for,” said Bill Lester, executive director of the Metropolitan Sports Facilities Commission.

A large section of the roof lay torn and whipping in the wind in the stadium’s north end zone, and snow that had fallen through the rip covered much of the field. Maki said workers were working with the manufacturer of the roof material on plans to repair and replace damaged pieces. He said there didn’t appear to be any other damage to the stadium.

The NFL briefly considered moving the game to the University of Minnesota’s TCF Bank Stadium, but the university said it couldn’t be ready in time. TCF holds about 50,000 people, compared to the Metrodome’s 64,000.

The city got 17.1 inches of snow during the storm that started Friday night and ended around 10 p.m. Saturday, said James McQuirter, a National Weather Service meteorologist. He said the storm was one of the five largest to hit the Twin Cities. Some surrounding communities got more than 21 inches of snow, he said.

The Metrodome roof deflated in 1981, 1982 and 1983, each time due to tears caused by heavy snow. The April 14, 1983, collapse forced the postponement of the Twins’ game with California, which had been the only postponement. A slight tear also delayed a Twins game briefly in 1986.

The Vikings will enter the final year of their lease at the Metrodome next season and have been lobbying for a new building for about a decade.

The Vikings have previously pledged roughly one-third of the cost for a new stadium, estimated at $700 million or more. But the team has had difficulty getting much traction with the state legislature on public funding to pay for the rest, with lawmakers pointing to huge state deficits that need to be addressed first.

The team has been contacted by two Los Angeles-based groups interested in bringing the NFL back to Los Angeles, but so far it has said it remains “committed to finding a solution in Minnesota.”

The Associated Press COLUMBUS — Due to fall quarter graduation at its home arena, No. 2 Ohio State was forced... read more