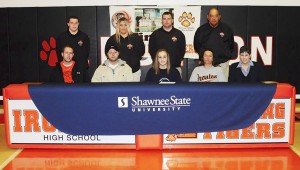 The Shawnee State Golden Bears needed to rebuild their team from the inside out. With the signing of Ironton Lady Fighting Tigers’ senior Nikki Elswick, the inside is finished.

The 6-foot senior with a long wing-span filled a major need for Shawnee State Hall of Fame head coach Robin Hagen-Smith Wednesday by signing a letter-of-intent to join the Bears’ women’s basketball program next fall.

“I think she can score inside and that’s what we’re going to need next year. She has the opportunity to play right away,” said Hagen-Smith. “She’s used to double and triple teams now, but in our system the girls outside can score more and that will free her up.”

Elswick was entertaining offers from a dozens schools including Eastern Kentucky, Ohio Dominican and Rio Grande. She said location and opportunity swung her to sign with the Golden Bears.

“I wanted to stay close to home. I can be home in 45 minutes or less,” said Elswick.

So far this season, Elswick is averaging 27 points and 11.3 rebounds as Ironton is off to a 3-1 start. In a marquee matchup against Talequia Hamilton of Huntington (W.Va.) High who has signed with Cincinnati, Elswick had 25 points and nine rebounds.

“Shawnee has a good program that should challenge Nikki,” said Graham. “She’ll have to earn her time, but they’re in real need of a post player and she can take advantage of that.

“Her improvement from her freshman year to now has been dramatic and she’s improving every day. She has the tools to play there and be a good player.”

Elswick began her offensive improvement last season when she worked her way into the starting lineup and ended the season averaging 10.8 points and 8.3 rebounds a game

“She’s got a lot of potential,” said Hagen-Smith. “If she works and hangs in there, she’ll be a good player for Shawnee.”

Elswick is looking forward to the chance to play.

“It’s a great big opportunity. Coach Hagen-Smith needs a player who can get in the paint and score 20 points a game and I think I can do that,” said Elswick.

“She has the ability to shoot the ball from the perimeter and for a center that creates a lot of problems for defenses,” said Hagen-Smith. “She has the work ethic and she can run up and down the floor.”

Playing in the tough Mid-South Conference will also be another challenge for Elswick as she steps from high school to the college level, but she is excited about the opportunity.

“I’ve been to Shawnee for games and I’ve been in that atmosphere. The players get along well and they play ball together and that’s what I like,” said Elswick.