Christmas for the homeless 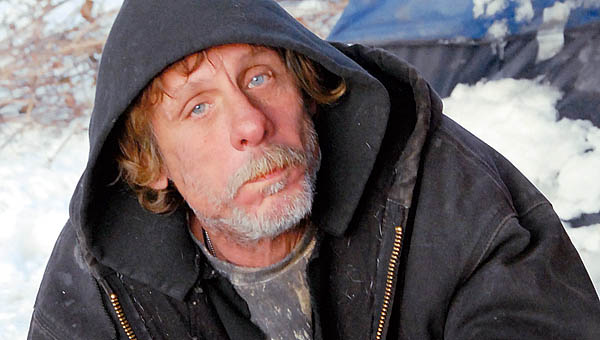 Edward Donat is one the people who live under the Sixth Street Bridge in Huntington, W.Va. The members of the First Baptist Church of Proctorville brought him and others food, fresh water and clothes. 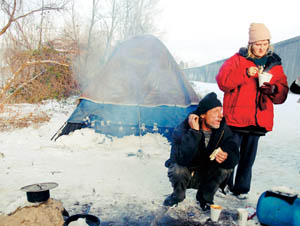 Donat and Diane Step are seen outside their home, a tent.

HUNTINGTON, W.Va. — For E.J. Marshall, home is a small tent located between the Ohio River and the Huntington floodwall.

“Actually I like it,” Marshall said of his living situation. “This is keeping me off drugs and alcohol.”

The Indiana native said he used to have a house and cars, but some bad choices took all that away from him.

“It’s cold out here but you’re either by a fire or in a tent,” Marshall, an out of work construction worker, said.

For a while on Saturday evening, Marshall and the others that live there got a special treat. The members of First Baptist Church of Proctorville brought Christmas to them, decorating a Christmas tree and bringing them dinner and coffee.

Church member Randy Thompson said the ministry, dubbed “Takin’ it to the Street,” is all about building relationships with anyone the church members meet.

For instance, last week after the church brought food to the homeless people, they met other people in Huntington.

“We have also fed teenagers who are waiting on the bus,” Thompson said. “This is not just a ministry to homeless people, it’s a ministry to everyone. We’ve met prostitutes, teenagers…”

Not only are the people the church ministers to diverse, so are the people who are involved with it. Saturday evening’s event had people from 5 to 72 years old.

The church got some help from several people in the community who donated items. The Christmas tree was a donation from Lowe’s. Someone else donated a turkey fryer to the ministry. Still others have given money.

For 19-year-old seminary student Ryan Navy, the ministry is about sharing the love of Christ.

“(I do this) to show them the love of Christ,” he said. “Christ’s love compels me to do this.”

Navy, of Huntington, has been participating in the ministry for the past two months and is getting to know the people, he said.

“I get to know their stories,” Navy said. “They’re more than just homeless people, they’re human beings with lives.”