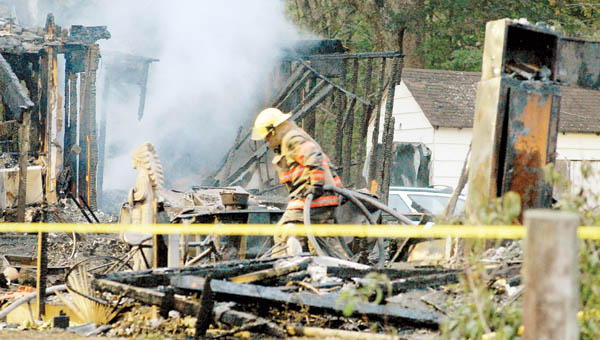 It was a year when Lawrence Countians saw the wrath of Mother Nature in full force, the fear and frustration that came from losing its long-time ambulance service and the heartbreak of losing a young soldier in the prime of life. But it was also a year when persistence launched a new emergency medical service and pushes work on a new medical complex in the city with the possibility of a new hospital in the future. As The Tribune does at the end of each December, here is a recap of the year with its highs and lows. Here is this year’s list of Top 10 stories for 2010.

1. In a few minutes a devastating house fire made Lawrence County a chilling statistic as it became the county having the most deaths by fire in the state.

That happened in October when an inferno consumed a 12-bedroom house in Pedro, killing five. It happened in the early morning hours at the home of Katheryn Whitmer who had turned her house into what she called a refuge for those in need.

Investigators determined that the blaze started near a portable heater in the breezeway of the house and was ruled accidental. Killed were Rebecca Sue Hall, 38, Ashley Renee Keaton, 23, Rachel Lee Whitmer Laber, 21, Jacqueline Rose Sizemore, 20, and Xzavier Rayan Keaton, 8-months.

Seven others were injured in the blaze. That brought the number of fire-related deaths this year in the Lawrence to eight, giving it the highest per capita fire death rate in the state.

Birth of EMS on horizon

2. For about 30 years it had provided emergency medical service to three counties. But by year’s end the Southeast Ohio Emergency Medical Services will have come to a halt.

Financial problems have plagued SEOEMS for months forcing it to get handouts from the three counties that supported it. Then this summer Athens and Jackson county commissioners voted to pull out of SEOEMS forcing Lawrence County to create its own EMS.

Under the direction of Buddy Fry, the Lawrence County Emergency Medical Services is ready to begin service Jan. 1 with 29 full-time and 30 part-time paramedics and EMTs.

When the heavens opened

3. As Rita Ferguson said at the time, Storms Creek lived up to its name. That’s when torrential rains poured into the creek along State Route 93 in mid July, sending residents scrambling for safety.

Homes were destroyed. Possessions washed away. Homeowners saw water bubbling up through floorboards in the middle of the night putting at times two feet of water inside homes. Those rains followed one almost as devastating in early spring.

With help from federal agencies some could reclaim their homes. Others had to reach out to family and friends to start over.

4. It was a nightmarish case that gripped Lawrence County for about 15 months.

Then two months after he surprised a Lawrence County Courtroom by firing his court-appointed attorneys Tom Wilcox pleaded guilty in July to murdering his wife, Amy Wilcox.

Amy Wilcox was only 38, when her estranged husband broke into her Perry Township home, threw gasoline on her and set her on fire. That was in April of 2009.

Amy Wilcox died two months later in a Cincinnati hospital. Tom Wilcox was facing seven charges, including three different aggravated murder charges. He had been facing the death penalty until a plea deal that Amy’s family had agreed to took that off the table. Wilcox will spend the rest of his life in an Ohio prison.

Also facing the death penalty this March was 30-year-old Kara Garvin from Franklin Furnace. Garvin was found guilty and sentenced to life without the possibility of parole during three weeks of trials in Scioto County Common Pleas Court.

Garvin was convicted of murdering three members of the Mollett family in their home in December of 2008. She maintained her innocence throughout.

Soldier dies for our country

5. The small tight-knit community of Coal Grove was reeling this summer with the news that one of their own had fallen in the line of duty.

On July 18, Sgt. Justin Bradley Allen, 23, was killed as he served his country in Afghanistan. It was his fourth deployment to that area and second to Afghanistan for Allen who was a member of the elite Army Rangers.

Allen died in a firefight while on a combat operation in Kandahar Province. He was heading up an assault on an enemy position when he was killed. The Coal Grove soldier was awarded the Bronze Star posthumously.

6. The Tri-State was shocked when one of its biggest employers announced unexpected layoffs in late July.

That’s when 82 full-time workers at King’s Daughters Medical Center learned that their jobs were gone and 20 were switched to part-time status. The hospital cited the bad economy that had resulted in nearly $100 million in unreimbursed care and debt.

That was a 33 percent increase in just a year’s time. However the employees’ union blasted the layoffs in light of a $31 million dollar profit a union representative said the medical center made in 2009.

7. The Village of South Point lost two of its longest and most stalwart supporters when in a matter of months Bill Gaskin and Bob Armstrong died.

Gaskin led the village for eight terms as mayor until his death in February at the age of 80. He was appointed to council in 1976 and elected mayor in 1979.

Then, in August, Armstrong, 73, died of a heart attack at his home. He had been acting mayor since late 2009 when Gaskin became ill.

Both men had served the village since their election to council in 1976. Armstrong was succeeded by Ronald West, council president pro tem.

8. A two-year-old case between a former Ironton police sergeant and the city could get resolved by the state’s highest court.

This month Ironton City Councilwoman Beth Rist appealed to the Ohio Supreme Court to get her job back on the police force.

Rist was fired by the city in 2008 after she pleaded guilty to falsifying a ticket during a traffic stop that she had made.

She was put on probation with the stipulations that she was not to carry a gun or associate with known felons. With her admission of guilt for that misdemeanor the city fired her. An arbitrator was called in and said Rist should be re-instated to her sergeant’s rank.

When the city did not put her back on the force, Rist filed a civil rights lawsuit alleging discrimination and the wrongful termination.

The Fourth District Court of Appeals ruled that the termination was legal. That ruling led to Rist seeking intervention from the high court.

New hospital in the wings?

9. It’s been the talk for years. Will Lawrence County get a hospital back in Ironton?

Now as St. Mary’s Medical Center begins work on a 46,000-square-foot medical campus, the county is hoping that a fully-functioning hospital can’t be far away.

The project is to begin with building a 24-hour emergency room in the next two years. The facility, at the intersection of U.S. 52 and State Route 141, is scheduled to open in early 2012. Right now there are modular units at the site to be used for doctors’ offices until the ER is up and running.

10. A longtime city of Ironton employee pleaded not guilty to felony drug charges this fall, shocking many. Tina E. White was arrested in September when she arrived at work as a dispatcher for the Ironton Police Department.

Gregory White later pleaded guilty and was sentenced to prison. Tina White’s case is still pending. She had worked for the city for 22 years.

Santa Claus has a long way to go and a short time to get there. For anyone wondering about his... read more