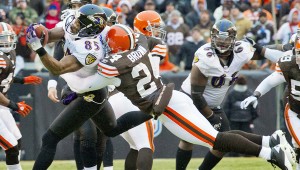 Cleveland Browns’ defensive back Sheldon Brown (24) brings down Baltimore’s Derrick Mayes (85) after a reception for a first down in the first quarter Sunday. The Ravens beat the Browns 20-10. (MCT DIRECT)

CLEVELAND — Ed Reed was on fire, and not because of his two interceptions.

Trying to cope on a biting, blustery day, Baltimore’s star safety moved too close to a sideline heater and had his oversized jacket ignite.

There was no panic, no alarm, no worries. The Ravens were moments away from a playoff-clinching 20-10 win on Sunday.

Reed, as cool as they come, picked off rookie Colt McCoy twice and damaged Browns bruising running back Peyton Hillis with a hard hit on Cleveland’s second play as the Ravens (11-4) clinched a postseason berth for the third straight season and stayed tied atop the AFC North.

Joe Flacco threw two touchdown passes, Ray Lewis and the rest of Baltimore’s tenacious defense backed up some pregame trash talk by bottling up Hillis and the Ravens remained tied with Pittsburgh with one game left.

Lewis had promised Hillis would not repeat his 144-yard performance against Baltimore in Week 3, and the big back didn’t come close, rushing for 35 yards on 12 carries. On his second attempt, Hillis was already going down when Reed came flying in and delivered a crushing blow.

It was a typical outing for Reed, the five-time Pro Bowler who upped his career interception total to 52 and spent the day making life miserable for McCoy, who got duped into a few bad throws by one of the best big-play playmakers in NFL history.

McCoy threw three interceptions and the Browns did little to help embattled coach Eric Mangini, who fell to 10-21 in two seasons and is awaiting a postseason review by president Mike Holmgren. Mangini’s cause may be hurt by questionable clock management to end the first half and a failed onside kick to open the second.

“What killed us were the turnovers and the mistakes,” Mangini said. “The Ravens are very difficult to beat when you play flawless football. When you turn the ball over as many times as we did, it makes it really, really difficult.”

Flacco threw a 15-yard TD to T.J. Houshmandzadeh in the second quarter and a 22-yarder to Derrick Mason in third as the Ravens built a 20-10 lead and turned things over to their stingy defense, led by Lewis.

Asked earlier in the week about Hillis’ surprising success against Baltimore on Sept. 26, Lewis scoffed, “A blind cat will find a meal every once in a while. When we get back to Cleveland, it’ll definitely be a different outcome. It won’t happen again.”

“Guys definitely made note of it,” tackle Joe Thomas said. “You don’t have to be a rocket scientist to figure out it’s a lack of respect.”

Lewis said he meant no disrespect to Hillis, but that he was trying to fire up his teammates for an opponent standing in their path to the playoffs.

“We respect him. A lot of us voted him for the Pro Bowl,” said Lewis, who told Hillis during the game that he liked his smashmouth style. “It was not trash talking. I was leading my defense, getting them prepared. I was telling my team that as long as I’m here that is not going to happen again.”

Reed wasted no time in sending a message to Hillis, ramming his helmet into the back’s ribs early on. Hillis said the blow had an effect.

“I couldn’t go out there to my full potential,” Hillis said.

Billy Cundiff kicked field goals of 27 and 40 yards as Baltimore won its sixth straight over Cleveland.

“Are we in?” joked Ravens coach John Harbaugh, who went out of his way to avoid playoff talk all week. “I told the team, it’s just the beginning.”

Time could be running out for Mangini, who defended his decision to try the onside kick. Mangini thought he could catch the Ravens napping, but kicker Phil Dawson’s bouncer didn’t go the required 10 yards and Baltimore took over at Cleveland’s 38.“I felt good about it based on what we saw after our other kickoffs,” Mangini said. “It was there. We just didn’t do a good enough job with it.”

Cleveland couldn’t sustain any drives in the second half, and the Browns’ last real chance ended when Reed intercepted McCoy in the end zone with 4:35 left. McCoy went 15 of 29 for 149 yards, dropped to 2-5 as a starter and learned the Ravens are back up their talk.

“I made a couple poor throws and it cost us,” McCoy said. “I just didn’t get it done. Turnovers killed us and it’s on me.”

Notes: Harbaugh said safety Morgan Cox likely tore a knee ligament on the game’s first or second play but stayed in. Cox will undergo an MRI on Monday. … Browns cornerback Joe Haden got his sixth interception, most by a Cleveland rookie since Anthony Henry had 10 in 2001. … Hillis has 60 receptions, five shy of the team record for a running back held by Greg Pruitt (1981).