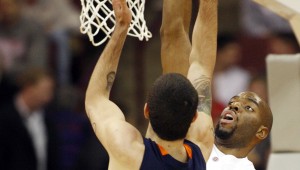 COLUMBUS — Lucky for Ohio State coach Thad Matta that he didn’t have to predict how good his team would be so far this season.

“If you would have put a gun to my head before the season started — 13-0, yes or no? — I don’t know if I could have told you that we (would),” he said Monday night after hig second-ranked Buckeyes romped to a 100-40 victory over Tennessee-Martin.

William Buford scored the first seven points of the game and came out of an offensive funk to finish with 23 as the Buckeyes tuned up for their Big Ten opener on New Year’s Eve at Indiana.

“I’m glad we went 13-0 in the non-conference,” Buford said after hitting 9 of 11 shots from the field, including 3 of 5 3-pointers, and adding five assists and four rebounds in 23 minutes. “We just want to stay hungry and get ready for the Big Ten.”

Deshaun Thomas chipped in with 20 points, Jared Sullinger had 18 points and 11 rebounds, and David Lighty and Dallas Lauderdale scored 10 points apiece for the Buckeyes (13-0), one of eight remaining Division I unbeatens. They are off to the fourth-best start in the program’s 112 seasons.

It was the ninth-biggest victory margin in Ohio State history.

“I knocked them down for the crowd. They got hyped after that,” he said. “Every team likes to shoot for 100 points. We came in, we were just ready to come down and blow the team out. We wanted to get 100.”

Ohio State took a 12-0 lead after the opening 3 minutes, then scored the first 18 points of the second half.

Reuben Clayton had 13 points for the Skyhawks (4-9), coming off a 4-25 mark a year ago and picked to finish last in the Ohio Valley Conference this season.

“I thought we’d play a little better,” coach Jason James said. “Obviously, they’re as good as they get in the whole country. I thought we’d come out and compete a little bit better. I don’t think you ever expect to get beat by 60.”

Matta moved to 97-2 against unranked teams at home and 90-17 against non-conference opponents in his seven years at Ohio State.

Ahead 49-17 at the half, Ohio State poured it on in the opening 5 1/2 minutes of the second half, going on an 18-0 run before Terence Smith ended the drought with a short jumper.

UT Martin fell to 0-9 against the Big Ten and 0-2 against Ohio State.

Buford, the Buckeyes’ second-leading scorer a year ago, had gotten off to a slow start this season. His shooting percentages overall, on 3-pointers and at the line were all down and he was averaging 12.5 points — down from 14.4 points as a sophomore.

He had worked after practice the past few days to try to regain his touch.

“Will’s one of those guys who gets stronger as the season goes on,” Matta said. “I was on him the other day for shooting 29 percent from 3-point range. The work he has put in in the last 48 hours, it’s great to see as a coach. You always love to see guys who work really hard. And he’s been taking a ton of shots after practice. That was good to see him play well tonight.”

“Absolutely. I had my legs under me today,” he said. “I was just focused in on if I had good looks, just take them and knock them down.”

But he made sure that he and the Buckeyes got off to a quick start. Buford hit a jumper from the right corner to open the scoring, then made a breakaway layup and popped in a 3-pointer to make it 7-0 after the first 1:06.

Sullinger then scored the next five points as the Buckeyes led 12-0. The Skyhawks didn’t get on the board until Terence Smith’s runner from just inside the free-throw line fell in at the 16:46 mark.

The Skyhawks, a young team chocked with freshmen, must try to build on the little things.

“It’s very difficult to find positives,” James said. “I think we only missed one or two free throws (they were 2 for 3), so we’ll try to build on that.”

Former Ohio State center Greg Oden, who led the Buckeyes to the national championship game, sat courtside. He received a lengthy standing ovation when a montage of highlights from his one year at Ohio State were played.

Buford said it was a thrill to see the big man, now on crutches while coming back from microfracture knee surgery, sitting across from the team bench.