New homes on the horizon 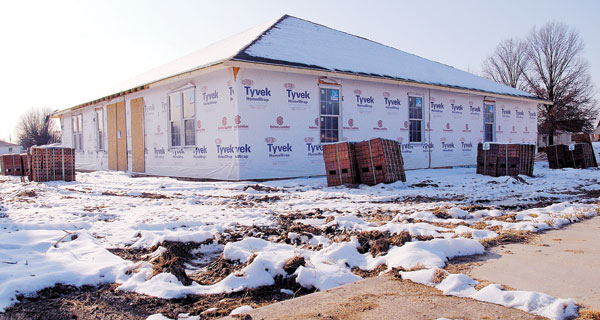 The future home of Ironton resident Bob Ackerman is the first of many residential houses that are expected to be built on the property that was the site Lawrence County General Hospital on Ninth Street.

Just a couple of months after officials gathered to celebrate the transfer of the property that was formerly Lawrence County General Hospital (River Valley Health Systems) to the Ironton Port Authority, the new residential area is finally beginning to take shape.

Just drive down South Ninth Street and you will see the house on the corner of Scott Street, the first to pop up on the land set aside for residential development thanks to a Clean Ohio grant project.

“The house that’s going up is 3,600-square-foot of first class house, just as we anticipate, just as we want,” said Bill Dickens, Ironton’s economic development director, of the structure that began construction about a month ago. “Not only has construction begun, but we’ve got a list of people anxious to get started.”

Dickens said that of the 16 lots total on the site, there are six firm commitments to build homes.

Ralph Kline, assistant director of Ironton-Lawrence County Community Action Organization, said they are working through a list of interested purchasers and everything seems to be going well.

“It was rather trying to get to where we are, but over the period of time we’re getting the outcome and results we want,” Kline said.

Kline and Dickens both agreed that more residential lots were greatly needed in Ironton.

“For the past several years, if you wanted to build a house in Ironton, you had to buy a lot with an existing structure on it, tear down that structure and build,” Dickens said.

“That didn’t always put you in the most desirable location.”

Dickens also said that, when development is complete, residents will be surrounded by all new homes in a nice and convenient neighborhood, with sidewalks.

“I think it’s just a great place to live,” he said.

Dickens said the process would be slow and steady.

“We hope to see by this time next year, eight or 10 new houses on the site, and eventually more.”

JACKSON — The case of an Oak Hill man charged in the death of an Ironton girl is scheduled to... read more