Pryor continues to find himself in the middle of controversy 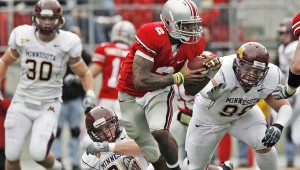 Ohio State Buckeyes’ junior quarterback Terrelle Pryor (2) keeps finding himself in the middle of controversy, such as the latest violation for selling personal items to obtain cash and favors. (MCT DIRECT PHOTO)

COLUMBUS — Quarterback Terrelle Pryor, the face of Ohio State’s football program, has been the talk of the town since the Buckeyes’ last game.

That’s not necessarily a good thing.

With a date against Arkansas coming up Tuesday in the Sugar Bowl, Pryor is looking forward to getting back in his element and putting a number of issues away from the field behind him.

The latest problem cropped up last week, when Pryor and four teammates were suspended for the first five games of next season. Already a lighting rod for controversy, Pryor was in most of the headlines when it was determined the players had sold rings, uniforms and awards for cash and had received discounts on tattoos from a local parlor over the past two years.

“I’m deeply sorry about the young, selfish mistakes I made a few years ago,” the quarterback said Tuesday, when the five players held a brief news conference in which they declined to answer questions. “I didn’t mean to hurt nobody at all and I didn’t mean to bring anything down or embarrassment to our university, because this is the greatest university in the nation.”

Ohio State’s investigation determined Pryor sold his 2008 Big Ten championship ring, a 2009 Fiesta Bowl sportsmanship award and a tradition-rich gold-pants trinket given to all Buckeyes players if they beat rival Michigan. Pryor must give to charity the $2,500 he received.

Many angry Ohio State fans have singled out Pryor in talk radio diatribes, on the internet and in the daily newspaper’s readers’ forum.

The Buckeyes flew to New Orleans, site of the Sugar Bowl, on Wednesday morning. As a high-profile starter, Pryor is expected to be available at Ohio State’s offensive news conference on Saturday. Then again, two years ago at the Fiesta Bowl, bowl organizers and national media were furious that Pryor was not permitted by coach Jim Tressel to talk under similar circumstances. The school will face a heavy fine if it does not produce him this time.

Pryor has done plenty of talking since the Buckeyes’ last game, that’s for sure.

In one comment on Twitter, he hinted of interest in playing basketball for Ohio State’s No. 2-ranked team. Then, after he received only honorable mention on the media’s and coaches’ All-Big Ten teams, he Tweeted, “Damn I must be the worst QB/player. I might quit football.”

In case everyone didn’t catch that hollow threat, he then reached out to a larger audience in an interview with The Chicago Tribune in which he said he would “dominate” if he were in the offenses of other comparable players. He was referring to the sets led by Heisman Trophy winner Cam Newton of Auburn and the quarterbacks selected ahead of him for all-conference.

“I’ll put it like this,” he told the newspaper. “You put me in any of their offenses — any of them — and I’d dominate. I’d dominate the nation.”

A teammate or two offered lukewarm support for Pryor, but that doesn’t mean it’s a unified front. It has taken some time for many to warm to him. Defensive back Tyler Moeller said when Pryor arrived in Columbus as the No. 1 quarterback recruit in the country out of Jeannette, Pa., he was “kind of a punk.”

Not all the Buckeyes believe Pryor was overlooked on the All-Big Ten awards.

“I don’t think there’s a feeling he got snubbed,” said wide receiver Dane Sanzenbacher, the team’s MVP. “There’s so many good players, not only in our conference but in the nation.”

Controversy seems to shadow Pryor, many of them his own doing.

He wore “Vick” on an eyeblack patch in honor of Michael Vick in 2009, after the Eagles quarterback had been involved in a dogfighting operation. Pryor then inflamed many by saying, “Not everybody’s the perfect person in the world. I mean, everyone kills people, murders people, steals from you, steals from me, whatever. I think that people need a second chance.”

After Wisconsin rolled over the Buckeyes in October, handing them their only loss this season, Pryor petulantly said that Ohio State could beat the Badgers nine out of 10 times.

Tressel is always quick to defend his star, saying his quotes are sometimes taken out of context. The coach almost never finds fault with Pryor’s play or his actions, either.

Some within the team still chuckle that Tressel once offered this bit of bombast: “There’s probably not a more compassionate human being in the world than Terrelle.”

Tressel would not say if Pryor is one of the handful of Buckeyes juniors who requested a draft evaluation from the NFL. Pryor has said he’ll definitely return, but many believe he’s reconsidering. Missing almost half of next season narrows the chances of impressing the pros.

A series of what he considers slights is partly what drives a talented yet enigmatic athlete who has won games but few admirers during his college career. Might those slights — real or perceived — provide motivation when the Buckeyes take on Arkansas?

“He’s a competitive guy,” Tressel said. “I don’t know if I’d call it a chip on his shoulder, but he would like to be very good.”

Lewis facing end of his tenure as Bengals’ head coach

The Associated Press CINCINNATI — A weathered banner on the side of a downtown sports bar proclaims the area “Marvin-nati.”... read more