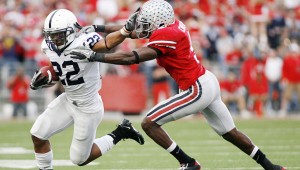 Ohio State’s Chimdi Chekwa (5) is stiff-armed by Penn State’s Evan Rotster (22) in the first half of their game earlier this season won by the Buckeyes 38-14. Ohio State looks for its first win against an SEC team in the Sugar Bowl on Tuesday. (MCT DIRECT)

NEW ORLEANS — Even after Ohio State cornerback Chimdi Chekwa was told about the Buckeyes’ bowl futility against teams from the Southeastern Conference, he had a hard time believing it.

“I think Ohio State has beaten the SEC in bowl games, if I’m not mistaken,” Chekwa said Friday, an incredulous look on his face. “It can’t be in all bowls. … I’ll go on the computer and look that up, but there’s been a lot of bowl games and I feel like they won a couple of bowl games against SEC teams, or maybe they beat an SEC team in a regular game.”

Well, the last part’s true. The Buckeyes have beaten SEC teams during the regular season, most recently LSU in 1988. In bowl games, however, Ohio State is 0-9 against teams from the conference that has produced the past four national champions.

The streak includes losses to Florida and LSU in the BCS title games for the 2006 and 2007 seasons, and the longer it goes, the more the Buckeyes have to hear about it when they wind up meeting another SEC team in the postseason. This time it’s Arkansas in the Sugar Bowl on Tuesday night.

“I know personally I have lost three in a row against the SEC,” Ohio State coach Jim Tressel said. “I’m not tired of hearing about it. It’s a reminder to me of just how good the SEC is in football. We are playing another great one in Arkansas.”

For their part, Arkansas players and coaches are trying not to make too much of the streak. None of them want to get caught talking about any kind of talent gap between the SEC and the Big Ten. That might be the motivation the Buckeyes need to avoid having to hear about being 0-10 the next time they meet an SEC team in a bowl game.

“It’s nothing I take seriously because every team’s different every year,” Arkansas quarterback Ryan Mallett said. “I don’t know what happened. I don’t know how to explain it.”

“Definitely — I don’t want to help them end that streak,” said Mallett, a Michigan transfer who also acknowledged a bit of residual animosity toward the Wolverines’ archrivals.

Next in the streak came losses to Auburn in the 1989 Hall of Fame Bowl, and three Florida Citrus Bowl losses to Georgia in 1992, Alabama in 1994, and Tennessee in 1995. Then there were back-to-back Outback Bowl defeats to South Carolina in 2000 and 2001, followed by the two BCS title game losses.

As the losses mounted, college football analysts began espousing the theory that team speed in the SEC, particularly on defense, is superior to that in the Big Ten.

One person going out of his way to debunk that line of thinking this week is Arkansas offensive coordinator Garrick McGee, who spent four seasons in Big Ten country as an assistant coach at Northwestern.

“The way you play fast is that you’re prepared and you understand what you’re going to do and how you want to attack, and you understand your opponent,” McGee said. “All of the talk about Ohio State not being fast, I don’t buy into that at all. There’s a game I coached where they had us 47-zip at halftime.”

The most advantageous aspect of his experience against Ohio State, McGee added, is the credibility it gives him when he tells the Razorbacks to avoid overconfidence.

“When there are people possibly trying to convince our kids that because (Ohio State) has lost to SEC teams in the past, that they’re not as fast or as talented … I can counter that,” McGee said. “That’s not true at all. This is going to be like the games we’ve played this season. It’s going to go down to the wire.”

Ohio State players say they don’t see the streak as any kind of weight on their backs. If anything, they’d like to meet SEC teams in bowls every year until they start beating them.

“It’s kind of a motivational thing,” Buckeyes linebacker Ross Homan said. “We kind of look at it as: This is the present, the here and now. That was in the past. We can only control what we do in this game on Tuesday night.”

“You want to be on a big stage, you know? Why not play against the best in the nation?” Homan said. “It’s a great idea.”

As for the task at hand, senior defensive end Cameron Heyward said finally beating an SEC team in the postseason could boost returning players’ confidence for next year, “and we get to shut that little streak up.”

Heyward said he doubts the Buckeyes’ miserable past against the SEC will have any bearing on how they play Arkansas, but he understands the interest that Ohio State fans, and by extension, many Big Ten fans, have in seeing things change.

“There’s a lot of great teams in the Big Ten and the SEC,” Heyward began, “but that’s what the bowl games are all about — show who the best conference is.”

Plenty of highlights in 2010 sports year

By JIM WALKER Tribune Sports Editor It was old hat for the Ironton Fighting Tigers. It was a new experience... read more