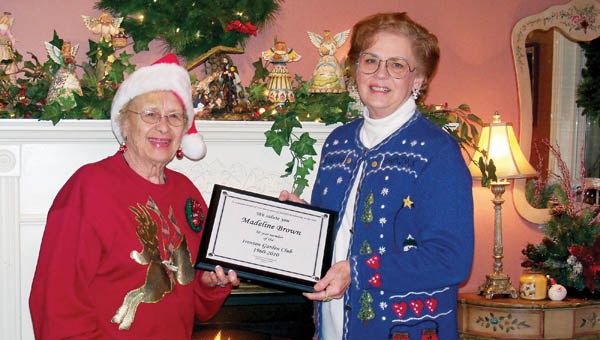 The Ironton Garden Club has been beautifying the city since 1928, with claims to being one of the oldest on going civic organizations and possibly the oldest garden club in the state of Ohio.

Madeline Brown has been involved for more than half of that time and she received recognition for it at the December meeting. She was given an award for 50 years of service to the civic organization. The meeting took place at the home of club secretary, Wilma Kingery, in Willow Wood.

Brown joined the club in 1960 and has been a member the longest.

While Brown was unavailable for comment, Kingery spoke highly of her participation in the club.

“She was always very active and on several committees,” Kingery said. “She was always upfront with everything and very helpful to all of the members.”

Kingery said Brown has been very loyal to the organization and the city of Ironton.

The plaque awarded to Kingery said, “In commemoration of your many years of faithful membership in the club, we salute you, Madeline Brown, 50-year member of the Ironton Garden Club, 1960-2010.”

The club currently has 19 members, three of which are men, which is a first in the club’s history.

The club started with a meeting of 10 women in April of 1928, who wanted to plant gardens in their yards and plant flowers and shrubs throughout the city to add beauty to the area.

Their first motto was “Knowing, sowing, growing and sharing.”

Some of the club’s past projects include building and selling hundreds of birdhouses to help the declining bluebird population, redoing landscaping at the Lawrence County Museum, maintaining the Vietnam Memorial plantings at the courthouse and having workshops and flower shows.

The motto for the group is now “Ironton’s beauty — Our civic duty.” The club’s objective is “To promote interest and knowledge to its members and to the community on home gardening and to encourage and take part in civic plantings.”

Anyone interested in learning more about the Ironton Garden Club or joining the club can call Doris Hannon, president, at 740-646-6462.

COAL GROVE — Today may have been the first of classes for students in the Dawson-Bryant School District, but Monday... read more