Highway patrol gets a new home 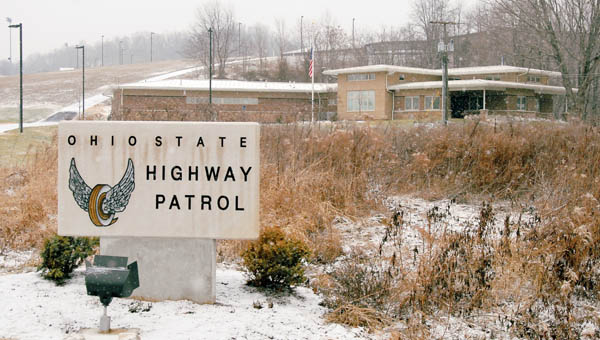 The Ironton Post of the Ohio State Highway Patrol, is now located at 141 Township Road 161 in South Point off of County Road 60 on the East side of South Point High School. THE TRIBUNE/JESSICA ST. JAMES 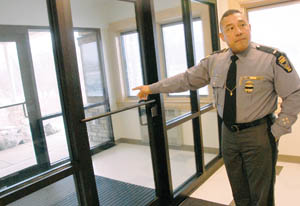 Lieutenant Michael Gore of the Ohio State Patrol in Lawrence County indicates new features to the recently-construction patrol post. Unlike at the old post visitors now have to be buzzed in and are kept in a waiting area where they do not have immediate access to the building.

It’s taken a while, but the troopers at the Ironton post of the Ohio State Highway Patrol finally have some room to breathe.

That’s because the post has recently moved to its new home on Township Road 161 in South Point.

The staff moved from its old post on County Road 60- which was a renovated home- to a new 5900 square-foot facility.

“We outgrew the old place probably 15 or 16 years ago,” Lt. Michael Gore said. “With the number of people we have and as technology increases and equipment 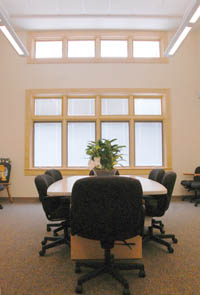 A conference room is readily available not only for members of the state patrol but also area organizations should they need a meeting place.

increases, you have to have a place to put it.”

Seventeen staff members work at the post, including 10 troopers, four sergeants, a post commander, secretary, and a maintenance worker.

Toledo-based company Harp Contractors constructed the new $1.8 million structure. Money for the project was approved by the legislature in 2006. Construction on the facility wrapped up in November and the staff started the moving process Dec. 11.

“It’s been a long process and like with any other construction process, there have been some setbacks but we worked through all of them and we’re in. Thank God,” Gore said.

The highway patrol owns the new building, unlike the old one, which it leased from South Point business owner Larry Carter.

The post had been at the old facility since 1985.

A community room near the front entrance of the building allows the staff a space to have meetings. The space currently has a kitchen area and a table, but the room will have nine folding tables and possibly a Smartboard soon, Gore said.

The new facility has a locker room. While the old one did as well, the old locker room was used for storage, Gore said. The new one has a bathroom with a shower and a changing room.

The evidence room at the new structure is bigger and better, Gore said.

“It’s more secure than the other one,” he said. “It was just a room at the end of the hall at the other one and basically it was a converted closet. This is an actual evidence room.”

A small interview room allows the troopers a quiet space to talk to people while they work on crash investigations. The old place didn’t have such a space.

In the BAC room– which stands for blood alcohol content– troopers can test to see if people are under the influence. The room is equipped with a breath testing machine and security cameras that are monitored by the post in Jackson.

“They can see them at the dispatch center to make sure nothing happens,” Gore said. “If they see the trooper wrestling around with someone they can send help.”

A bathroom off to the side of the BAC room has an all-tile floor that can be hosed down and flushed in the event a person gets sick there.

“It makes it easy to clean,” he said.

Gore said staff reaction to the new space has been positive.