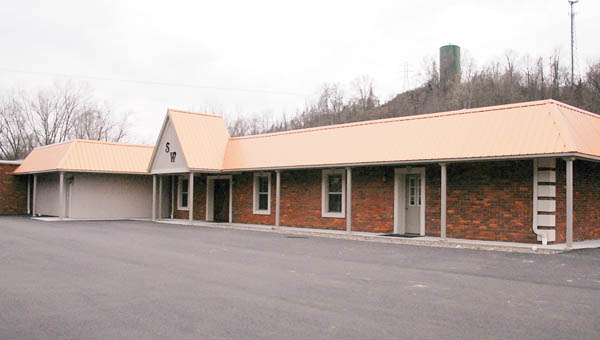 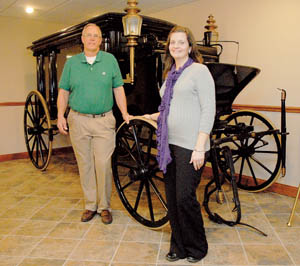 Beth Wallace and Richard Slack are the owner of Slack and Wallace Funeral Home located in South Point on Solida Road. Wallace and Slack worked elsewhere in the funeral business before teaming up.

SOUTH POINT — Beth Wallace was 13 years old when her 10 year-old brother, Jason, was killed in the Ohio River Fireworks tragedy in Scottown, during which a lit cigarette ultimately claimed the lives of nine people.

It was then she knew what she wanted to do with the rest of her life. She decided to go into the funeral business.

“I think it’s the last thing you can do for a family,” Wallace, now 28, said. “(The funeral home) really took care of us and were really understanding. It was such a tragic loss.”

Together with Richard Slack, 57, the pair has started Slack and Wallace Funeral Home, which opened this week, on Solida Road in South Point.

Slack had started in the funeral business as a part-time job during college when he was studying to be a pharmacist. He started his education at Ohio Valley University and then graduated from Pittsburgh Institute of Mortuary Science, and has 38 years of experience.

Wallace first graduated from Marshall University and then went on to the graduate from the Cincinnati College of Mortuary Science. She has 6 years of experience.

The two met working together in the funeral business and made the decision to branch out on their own.

“My wife and I bought this building three and a half years ago, but we didn’t do anything. We basically bought it as an investment,” Slack said. He said a church had used the building and had moved to another location, and when Wallace contacted Slack and his wife about the starting the funeral home, everything just worked out.

The business planning began in April and both said it has gone well, but Slack added, “It’s never as easy as you think”

“It’s going good,” Wallace said. “It was harder because we had to gut everything and start as a shell. We didn’t start new so it took a little more work.”

From the copper-colored roof to the tile floor and aquarium in the lobby area, details have been decided on and decisions have been made. The funeral home has a chapel for services that seats about 150, as well as two visitation rooms, one seating about 50 and the other about 75 or more. There is also a lounge for the families, with an area for children with things to entertain them. A horse-drawn hearse, used in the early 1900s, stands in the lobby as a focal point.

“We just felt like South Point has really never had a funeral home for any length of time and we felt there was a need for it,” Slack said.

“We are a full service funeral home,” he added. “We want to be a part of the community and, as such, we want to provide the type of service people would expect.”