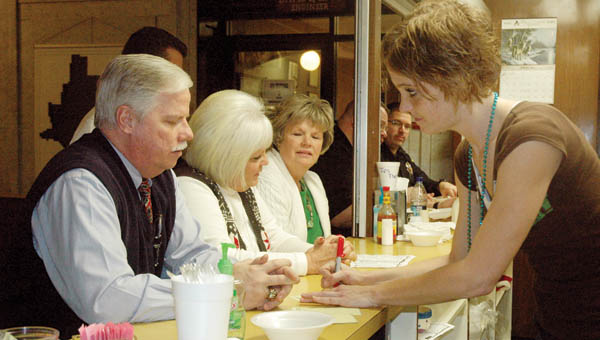 Angie Layne takes orders from the lunch crowd Monday at Angie’s Kitchen on the second floor of the Lawrence County Courthouse.

For a year and a half, Angie Layne served lunch to customers on the second floor of the Lawrence County Courthouse at Burgers and More. When the business closed several months ago, Layne saw it as her golden opportunity.

Layne, 30, opened her own lunch counter in that location and serves breakfast and lunch to employees and visitors alike. Layne said she really thought she could do a great job at it and she loves the people she serves at the counter.

While the name is not yet official, Angie’s Kitchen has been open for the past few weeks and Layne said business is going well.

The lunch counter is open from 7:30 a.m. until 2:30 p.m., serving things like bacon, eggs and the biggest morning seller, biscuits and gravy. For lunch, burgers, sandwiches, hot dogs and salads are on the menu.

Layne also has a lunch special on Mondays, Wednesdays and Fridays.

She runs the counter herself, but has a couple of helpers trained in case she would need time off for a doctor’s appointment or other emergency.

The location doesn’t require rent, but did require an interview process by the commissioners.

“We turned it over to our administrator to do the interviewing and hiring,” Commissioner Les Boggs said. “It’s important to know that it is not subsidized with any taxpayers’ money. It is an independent business.”

Boggs said it is a benefit for the courthouse.

Boggs said when Burgers and More shut down and there was a period of a few months without a lunch counter, people missed it.

“It’s a lot easier with one,” Boggs said. “The public comes in a lot for different things, and we kept hearing people say they missed it, especially on court dates.

I can speak for myself, I come in in the mornings and it’s a nice place to eat lunch.”

Joe Ross had breakfast there for the first time on Monday and tried out the biscuits and gravy.

“I heard it was good and was here waiting and I wanted to try it,” Ross said. The aroma of bacon and eggs wafted throughout the building.

“That’s what makes you want to eat it,” Ross said.

Shawna Neal is a secretary for the Lawrence County Engineer’s office and is a regular at Angie’s Kitchen.

“Every morning — breakfast and lunch. And if she was open for dinner, I’d eat here then,” she said.

Neal said during the months the counter was closed, she resorted to the snack machine, and is glad the counter is now open.

Claims there is no constitutional issue The City of Ironton has filed a response to former police sergeant Beth Rist’s... read more