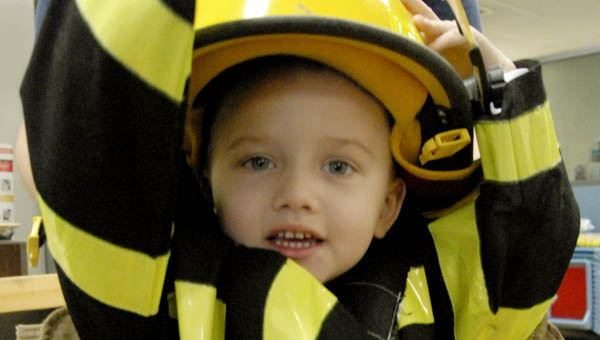 Aiden, acting fire chief, tries on the “real” jacket and helmet over his play fire clothes. The children from the Lawrence County Early Childhood Academy at Collins Career Center got to take a tour of a real truck as well as what to do in case of a fire like crawling on the floor and getting a neighbor for help. 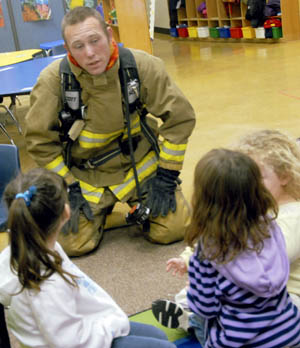 Tyler Hamlin, with the Windsor Fire Department, talks to children from the Lawrence County Early Childhood Academy at Collins Career Center about fire safety and lets them try on equipment during a visit Tuesday.

Tyler Hamlin stands surrounded by a dozen small children on a colorful carpet.

The firefighter’s question is met with a chatter of responses from the students at the Lawrence County Early Childhood Academy at Collins Career Center.

Hamlin and his wife Megan, both volunteer firefighters from Windsor Township, spoke to the children about fire safety Tuesday morning. Firefighters from the Chesapeake Union VFD also spoke with the children, showing them the lights and sirens on the fire truck.

The event was an effort to reverse a troubling trend in Lawrence County. The county led the state in the number of deadly fires last year.

“We figured this would be a chance to teach them early and get this trend to stop,” Tyler Hamlin said.

The couple taught the students what to do if their clothing or house catches fire.

Many times when children are in a burning building, they run and hide rather than going to firefighters. Tyler demonstrated wearing his protective gear and breathing equipment. The idea is that if the children know what firefighters look like in their equipment they will be less likely to fear them if they come into a house looking for them.

“There are too many kids who died last year,” Megan Hamlin said. “Way too many. It’s better for them to see us as we are and not be scared of us.”

“(This is) just so they will know what to do in the event of a fire,” she said. “This is also a good opportunity for hands-on learning for them.”

CHESAPEAKE — You can be a team of three or a team of 30. The only requirement to participate in... read more