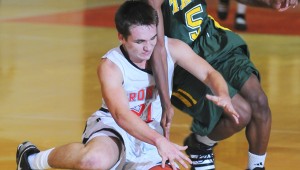 Travis Elliott doesn’t wear a regular tank-top uniform. It only looks that way. Actually, his uniform has long sleeves and he rolls them up just before he takes the court.

“I think it’s kind of fun,” said the three-year starter. “It really doesn’t matter what my job is, I just do it to win the game. If we can come up with a victory, that’s all that matters.”

Ironton head coach Mark LaFon appreciates the work Elliott does and his leadership by example.

“Travis gives you everything he’s got from start to finish. He does all the dirty work and never complains,” said Ironton coach Mark LaFon. “Travis does everything you ask of him. You’d love to have a team made up of Travis Elliotts.”

Being the blue-collar guy is a role Elliott relishes, but he admits it wasn’t always that way. During his earlier playing days he enjoyed having a scoring role as much as playing defense or rebounding.

Elliott now has a more mature approach to the game and realizes it’s about team first and individual accolades are only a byproduct.

“At first it was tough to accept, but it’s not about me. It’s s more about the team. If I do my role and I don’t get a headline, as long as we win, we’ve accomplished our goal. Our number one goal is to win,” said Elliott.

So far this season Elliott is averaging 10 points and 6.4 rebounds a game at Ironton is off to a 6-3 start. He was part of last year’s team that won the SEOAL championship and finished as the Division III regional runner-up.

As a senior Elliott has taken on another role as team leader along with Ironton’s other seniors Malcolm Morton and Josh Murphy.

“It’s a big difference. We were more of followers in the past. Seniors need to be more of a leader than we have before. We have sophomores looking up to us,” said Elliott.

Having so many young players on the varsity roster — Ironton starts two sophomores and brings two more off the bench — has made progress slow this season. Elliott said the players are learning on the job but he attributes LaFon for moving the team forward.

And Elliott will be where he needs to be. On the court doing the dirty work.