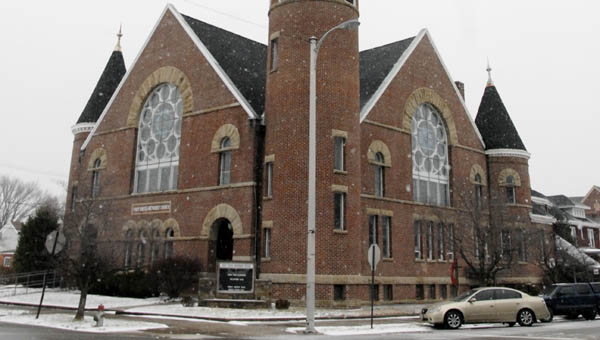 Harvest for the Hungry Sunday is a program sponsored by First United Methodist Church in Ironton.

IRONTON — Pastor Wayne Young of First United Methodist Church in Ironton was at a district meeting when someone shared a food pantry fundraising idea that he thought might work for the Downtown Food Pantry, that serves Lawrence County.

The result was Harvest for the Hungry Sunday. Young and others sent about 300 letters to businesses and individuals to let them know of the needs of the food pantry, and what they wanted to do. The goal was to raise the money needed for the following year by this one campaign.

With $8.50 needed to serve each person, Young estimated a need of $40,000 for the coming year. More than $25,000 came in on the Harvest for the Hungry Sunday and after all the numbers were added up,

Young is pleased to say the pantry received $41,000 by the end of the year.

The money raised will provide food this year for the pantry, which serves around 400 people every month.

“Along with the usual donations we get from folks throughout the year, it should keep us going,” Young said.

Some churches and individuals said they will continue to make monthly donations.

“I think that given the knowledge that people do care, we hope to be expanding our efforts in the area of service to the area,” he said. “What form that will take remains to be seen, but we are encouraged with these results. We hope to do more in the future.”

With the success of the fundraising efforts, Young said Harvest for the Hungry Sunday will happen again in the fall of this year.

“It was a good campaign and we plan to do it again,” he said.

With tax season upon us, the Workforce Development Resource Center is gearing up to make the annual process a little... read more